Every photographer that worth his/her salt should know what Manfrotto‘s name stands for, heck many of them might have owned one or more of the Manfrotto’s product. But since many of us mobile photographer didn’t originally come from that profession, it would be understandable if we know nothing about them.

In short, Manfrotto is a company based in Italy who designs, manufactures and markets a wide range of camera and lighting support equipment for professional photographic, video and entertainment market. Started by an Italian guy called Lino Manfrotto back in the 60’s, the company has been creating things like tripods, heads/clamps/brackets, lights, bags, etc.

Recently, the company made its strategic move to support the mobile photography community by creating a range of accessories that cater especially for this rather new community. Not just one or two types of accessories but the whole lot, practically creating a complete solution for mobile photographers who want to take its trade to the next level.

Along with this, Manfrotto is also taking an active role nurturing the community from the inside by creating and maintaining a blog called Manfrotto Imagine More. The blog posts news, tips and tricks and guest posts from many household mobile photography’s names. They also runs regular contest on the blog.

I am applauding Manfrotto’s initiative in supporting mobile photography community, and I’m hoping that more and more ‘big industry names’ would follow the path that Manfrotto has been set. There are a lot of mobile photography accessories being sold out there, but the ones that have quality are pretty far and between.

I have digressed a little bit too far, because today I would like to give you a hands-on review on one of Manfrotto’s cool product. This little gem is aptly called Pocket! It’s a tripod but not like the average tripods you’ve known before, in fact it’s probably the tinniest tripod you’ve ever seen. 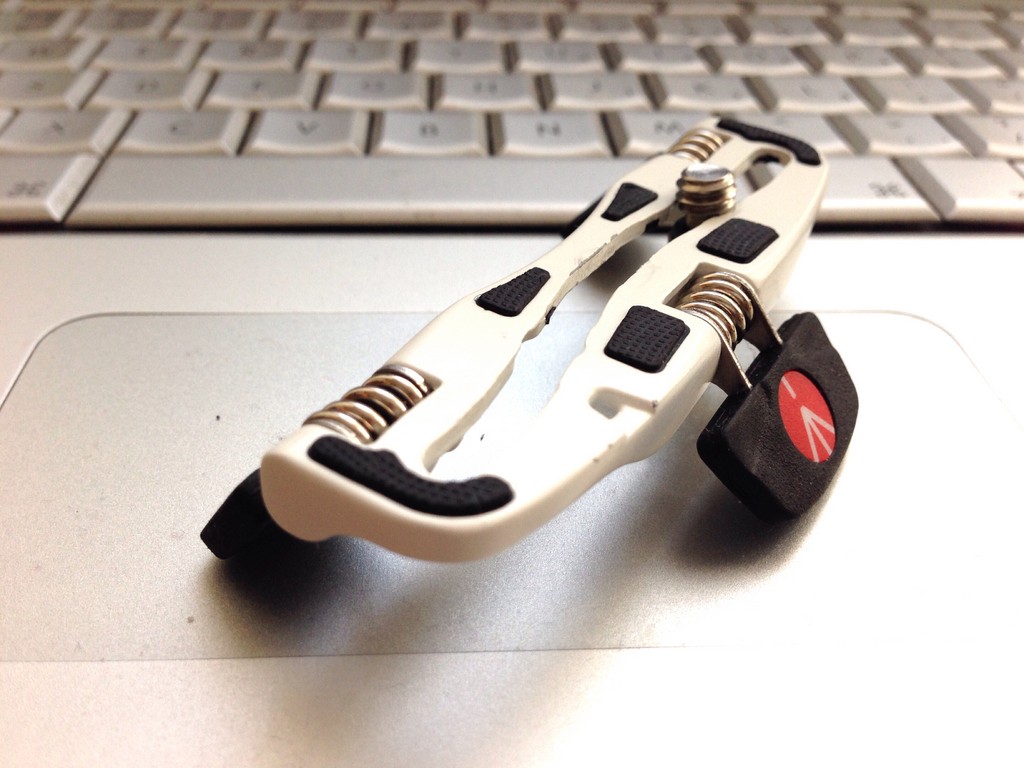 In truth the Pocket was not solely created for the mobile photography, as a matter of fact it can be used for other types of camera, the pocket camera as the product name’s suggested being the main target market. But, there is no reason that it can’t be used with mobiles, as you can always use one of those mobile tripod mount adapters like the one that Manfrotto supplies with its Klyp+ range (watch this space for a full hands-on review on this range of cool products).

​Why would I need a tiny tripod?

Here is a scenario to consider when having something like Pocket might come very handy. So you are out and about with friends and families, at some point you want to take a group picture ‘with you in it’. You start looking around for something to prop your camera/mobile on to, so you can use the timer to take the picture. You might get lucky to find a place stable enough for this, or when you don’t find one you start to use anything to level your camera, it could be a book, your bag, your wallet, anything. The best way to stabilize a camera is of course by using a tripod, but who is in the right mind would carry the three-legged thing everywhere? Even a small tripod is still pretty long. Now, would it be cool if there is a tripod small enough that we can carry in our purse? Manfrotto has created exactly that with the Pocket! 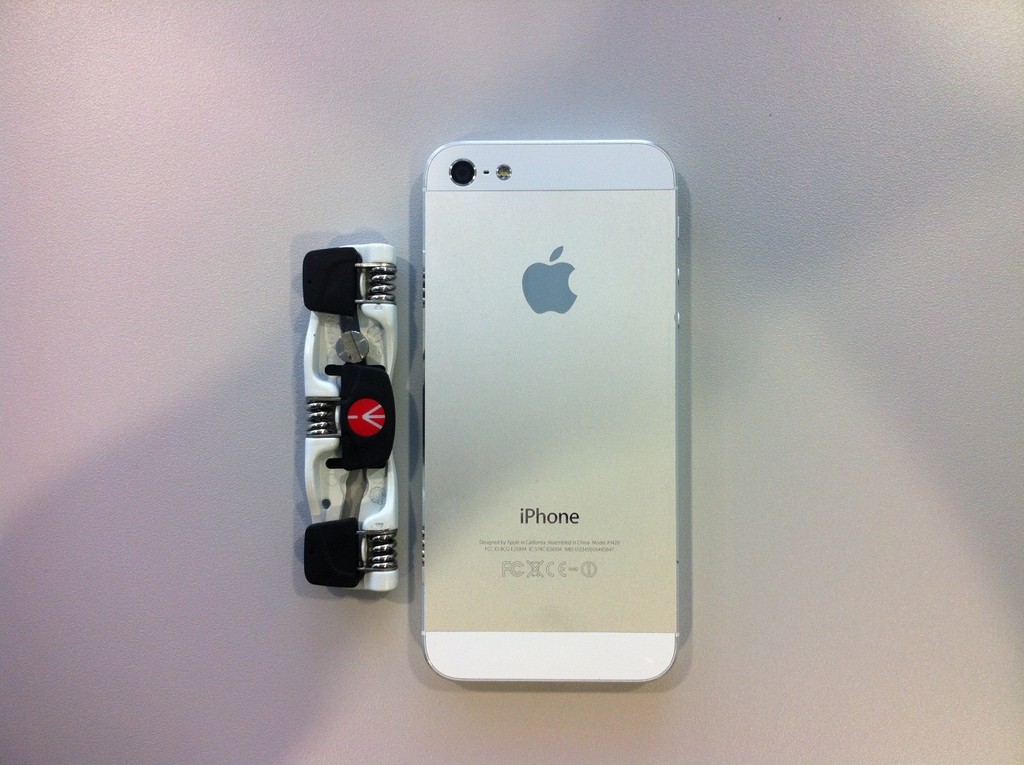 Unlike the conventional tripod with a cone like shape, Manfrotto Pocket shapes like horizontal platform. Made of metal, the platform measured only 5cm long and 1.5cm wide, smaller than an average credit card. 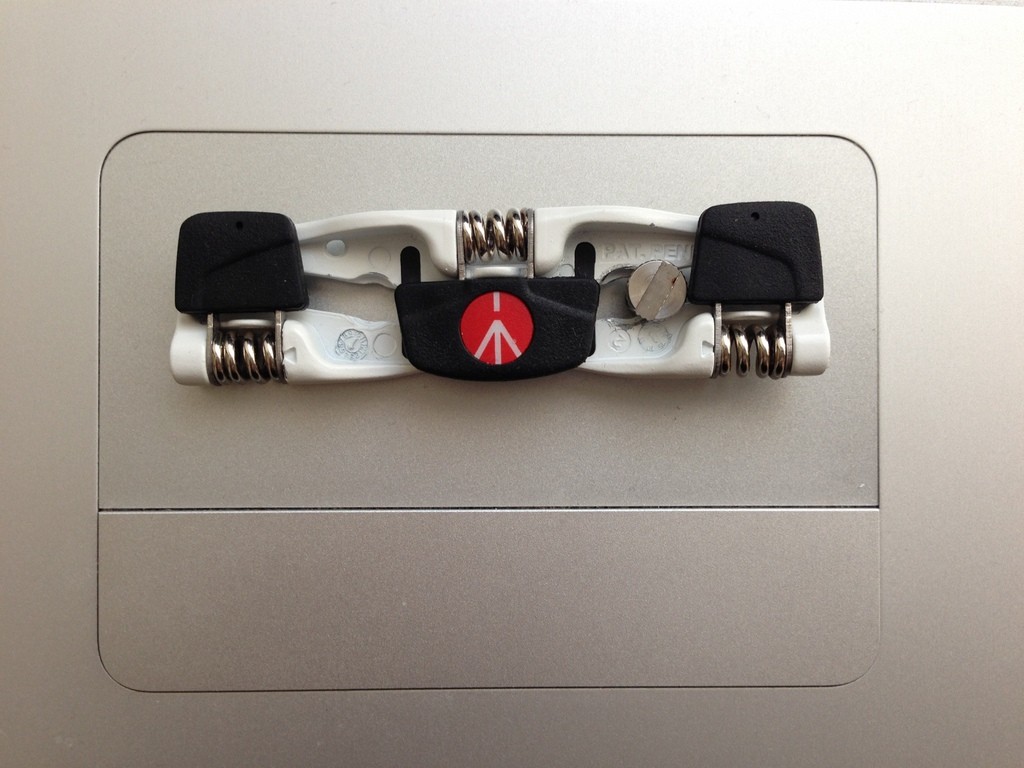 The 3 tripod leg, made from non-slip rubber, are attached 2 at the each side and 1 in the middle. These legs are folded flat to the main platform when not in-use making the whole thing only measured 1/2cm in thickness. 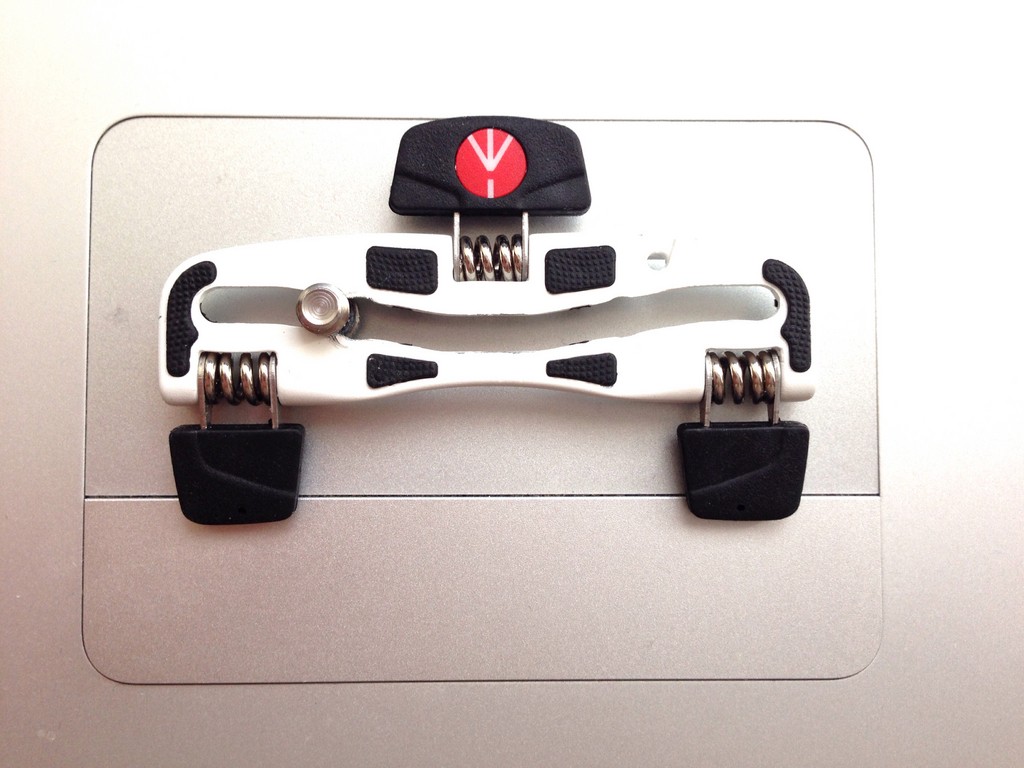 When you want to use it you can retract the legs and you can adjust each of them independently (unlike standard tripod). This independent leg adjustment is one great advantage of the Pocket, because it means that you can accommodate all sort of ‘terrain‘ conditions you might encounter. It’s make it more versatile. 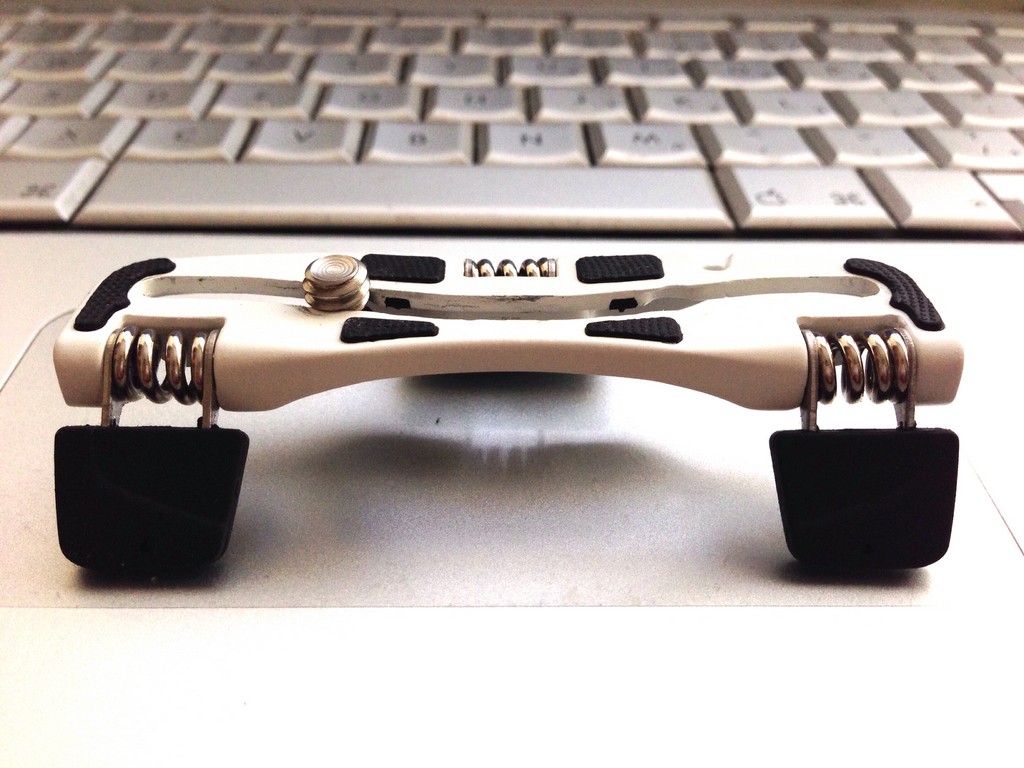 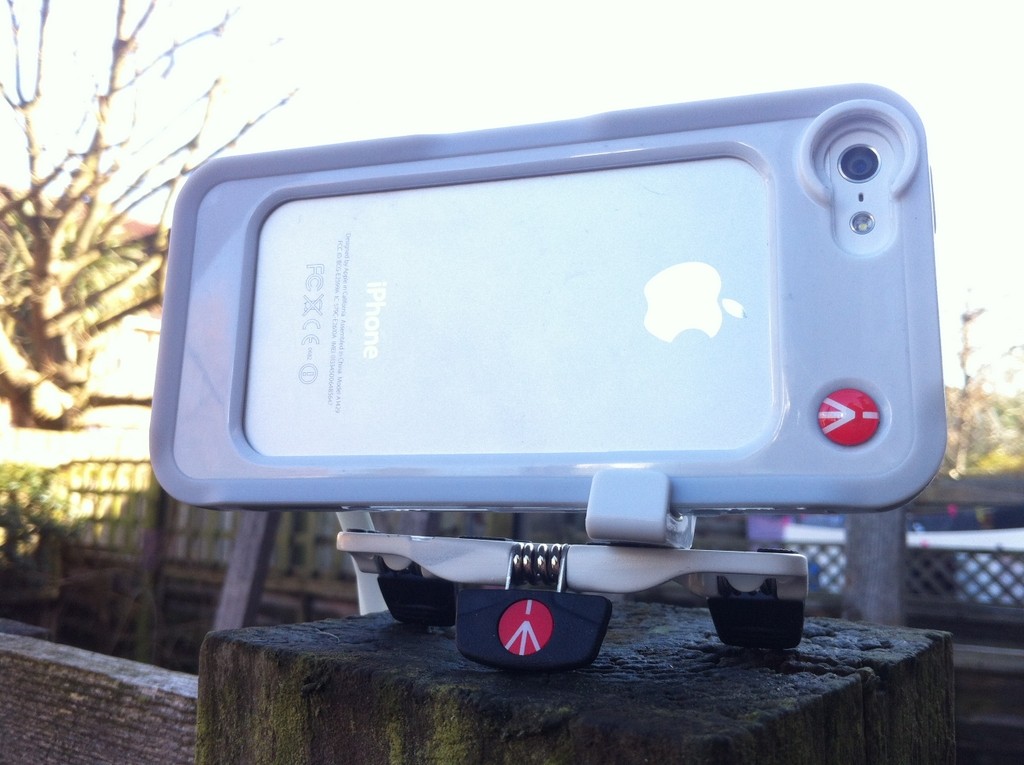 Note for mobile users, you will need to use a tripod mount, like for example the Glif or Manfrotto’s own Klyp+ to attach your mobile to the tripod. 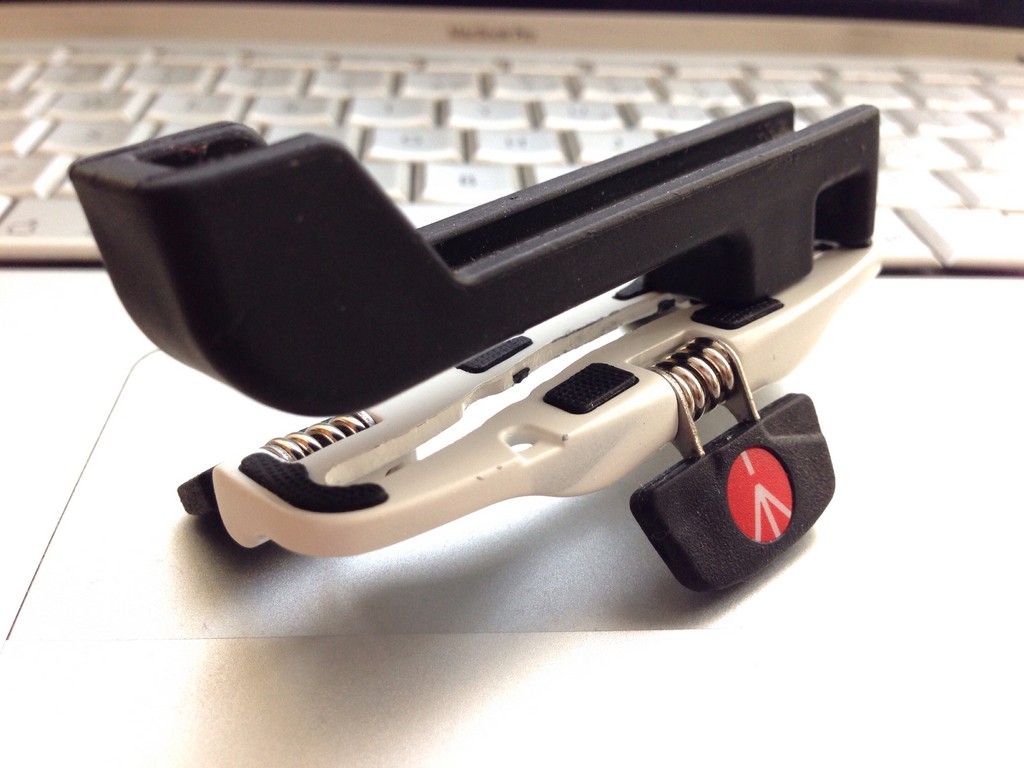 The Pocket is also very light that you might want to consider to just attach it to your camera permanently, ready to be use where ever and whenever you need it.

Despite of all the advantages I’ve mentioned above, it’s obvious that with a maximum height of 2.1 cm (with the leg fully extended), the Pocket can only be used to navigate only the simplest obstruction. And because of its small size it can only accommodate a limited type of camera. The mobiles and compact cameras should be accommodated well, but as soon as you attach a DSLR on it, it will topple over. 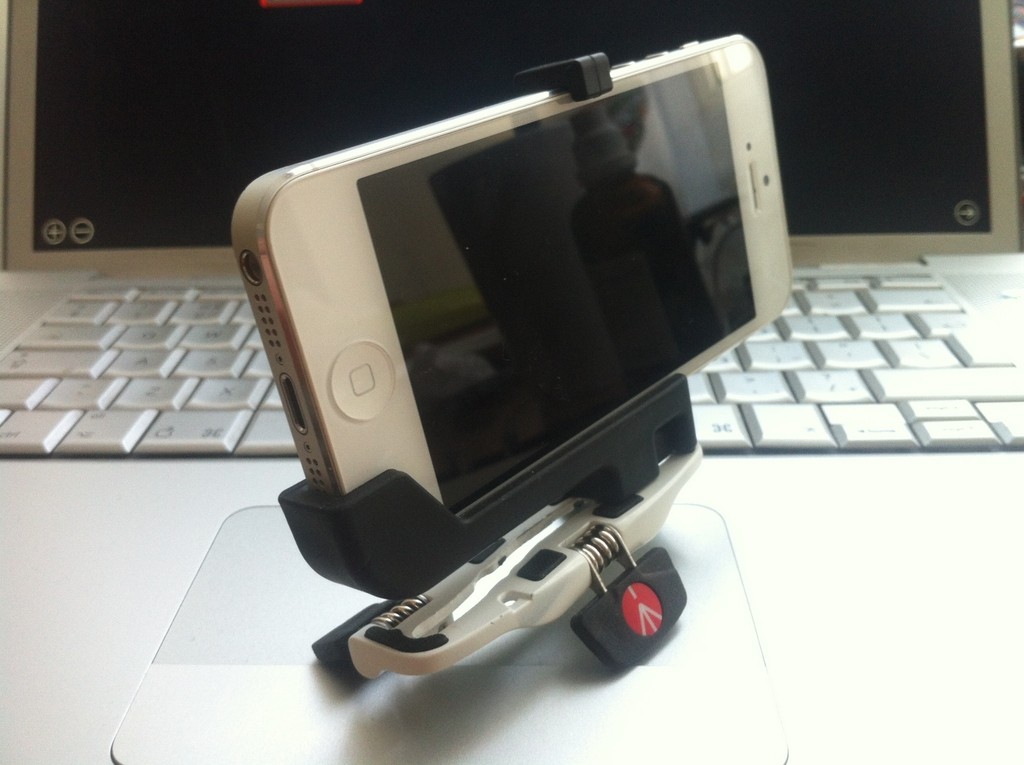 Having said that, Mafrotto has also produced a bigger version of the Pocket which can carry an entry level DSLR with a standard lens (long tele lens will still not do).

Manfrotto Pocket is perfect for emergency moment, when you desperately need something to stabilise your camera/mobile but you didn’t bring your behemoth tripod, though there are still limitation.

But since this is a blog for mobile photography, I’d say the Pocket is actually perfect for most occasions. We take our mobile where ever we go, so why can’t we take the tripod along with it too? 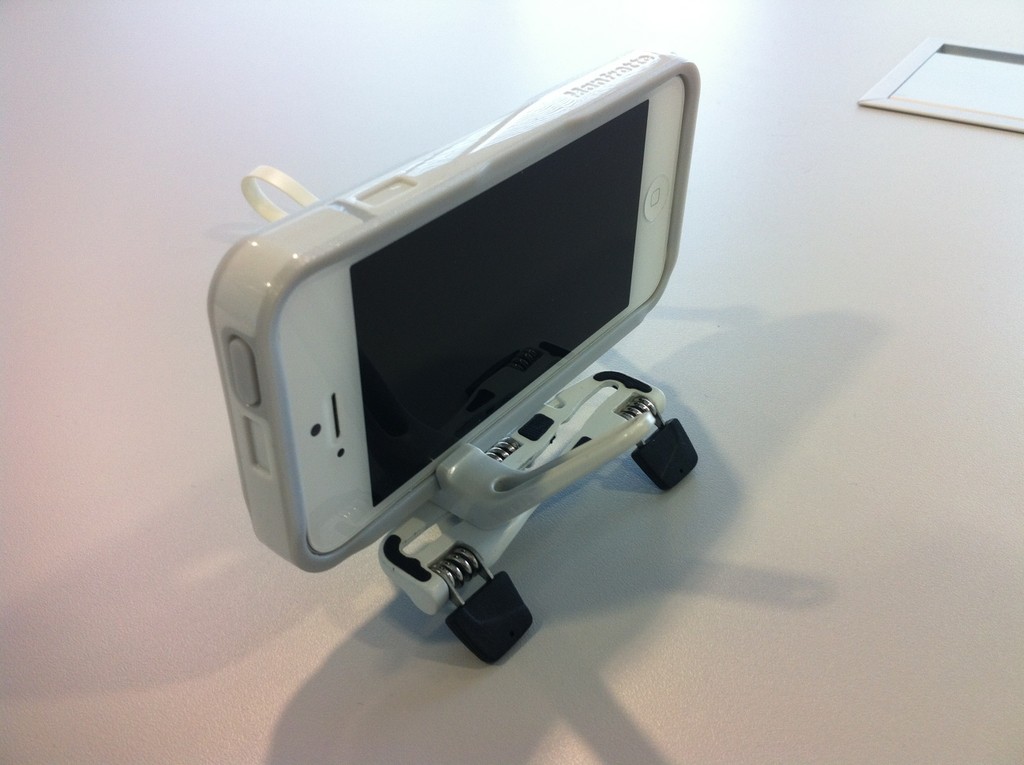 Manfrotto Pocket sells for $23 for the small version (reviewed here) and $30 for the large version. For the small one you can choose colour among Black, White, Blue, Grey, Pink, Purple or Red. While for the large one you have Black of Grey to choose from.

In the UK, the small Pocket costs £19.95 and the large version costs £29.95. Both version only available only in Black and Grey colour, though I noticed that in this UK version it comes with what it looks like a screwdriver which you can use with the 1/4″ thread screw. Pretty handy.

There are still a few more mobile photography accessories that I’m going to review very soon, so please ‘watch this space‘.