The Glif – Simple and Elegant Solution for your iPhone needs 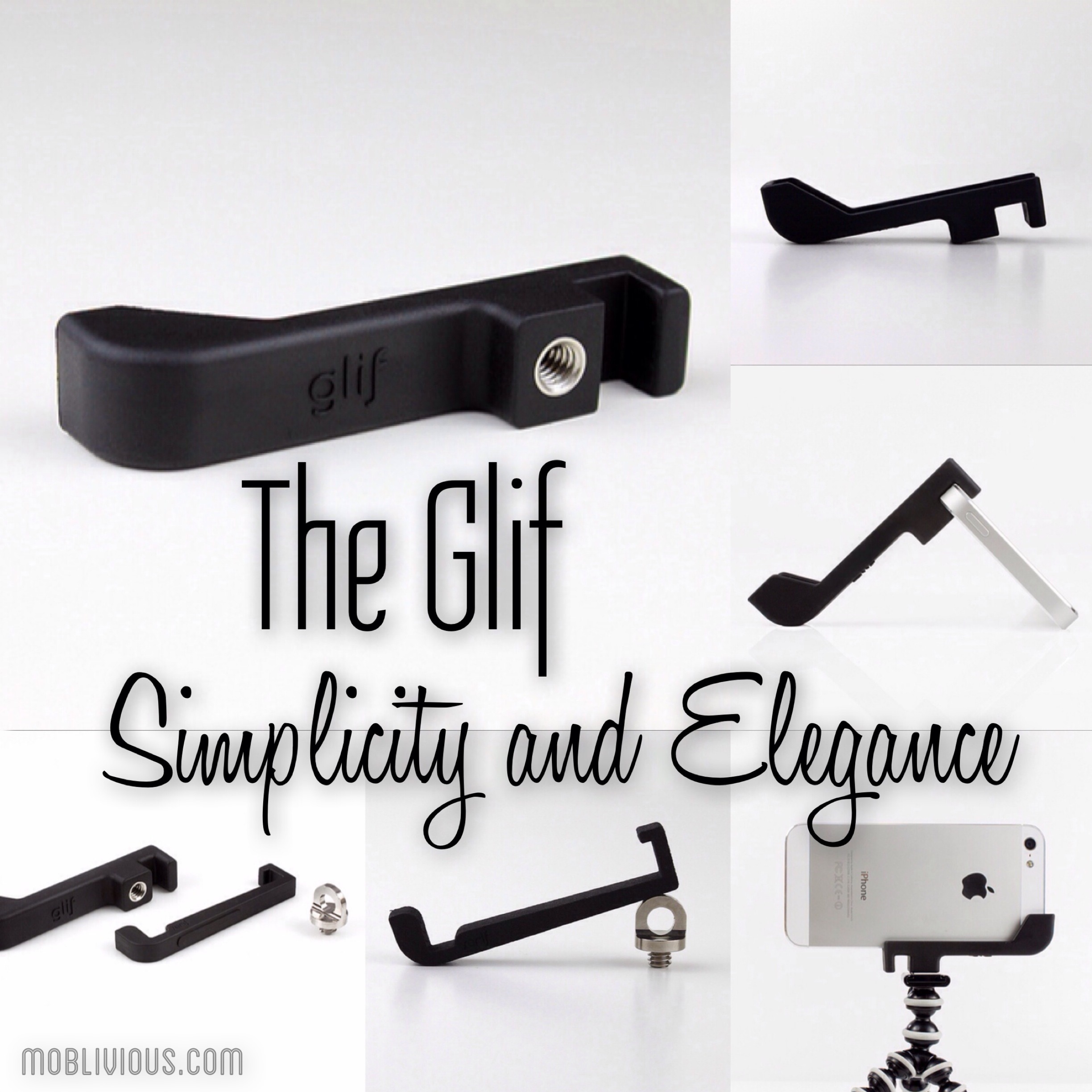 We have all been in this same situation, either we want to watch something on our iPhone or to talk with somebody via Facetime or Skype or something similar, but we don’t want to hold our iPhone with our hands while doing those thing, we want a hands-free action. Alas there is no magic way to make the iPhone stands on its own, so we usually end up scrambling to find things around us where we could stand or prop the iPhone on (my favourite is my coffee mug or my Macbook screen).

Studio Neat, a company duo by Tom and Dan, tried to alleviate our frustration by creating something simple and elegant called The Glif!

Studio Neat is one of those companies that had put their idea about amazing product up on Kickstarter, the online platform that connect inventors directly with people who are interested to back the idea and pledge some fund into the project. I’ve seen cool products coming out of Kickstarter, many of them are related to Photography, that have ‘made’ it, fully funded – many even exceeded – and got the product to the hands of their backers. The Glif was one of them. Tom and Dan pledged $10K for the project and ended up getting more than $130K from over 5000 backers. That was really a lot of money and a lot of people! But then again, the fact that there were so many people put their hard cash on a mere ‘idea’ (and a promise) was a testament on its own of how attractive this particular idea was.

​What is The Glif?

In short, it’s a small and neat tool – it looks like and is not much bigger than a bottle opener – that works as a Kickstand with which we can prop up our iPhone. It’s made from recyclable rubberised hard plastic that feels pretty sturdy and not slippery. 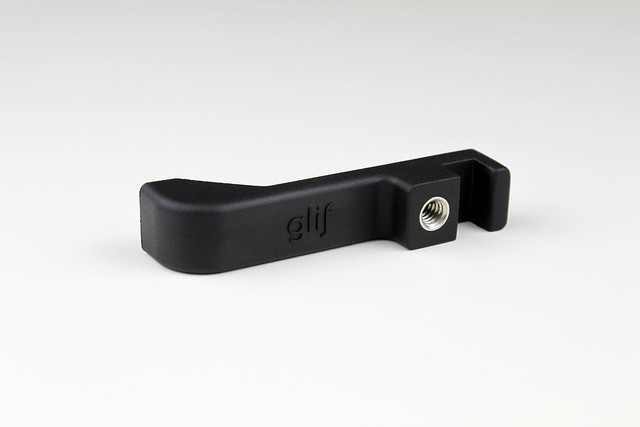 At one end of the Glif there is a grove into which you can slid you iPhone. 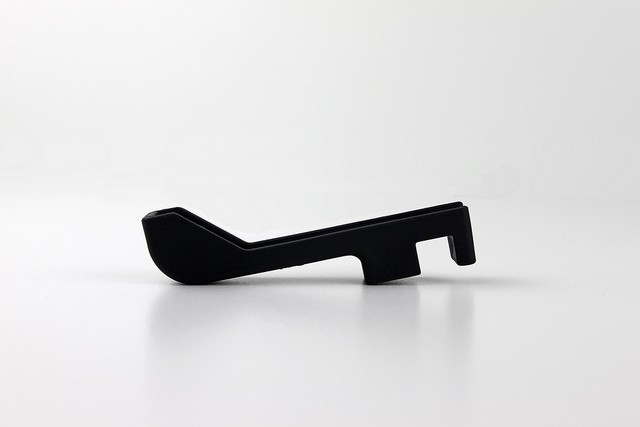 Et Voilà! You have your kickstand, quick and simple. You can now prop your iPhone on vertically (useful when calling people with Facetime or Skype), or horizontally (useful when watching YouTube clips or working with wireless keyboard). 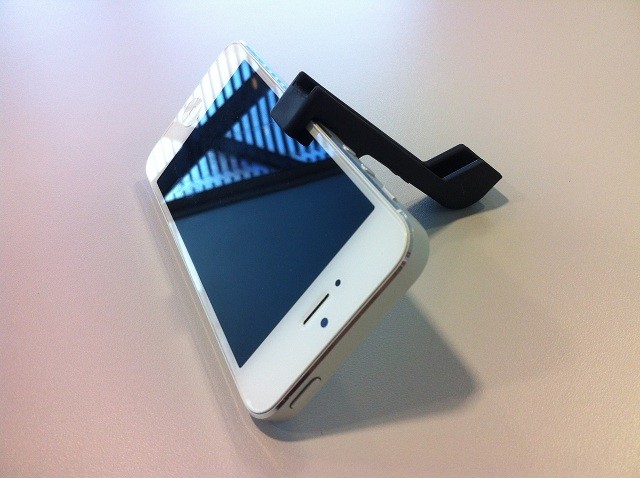 ​The Glif On My iPhone Front 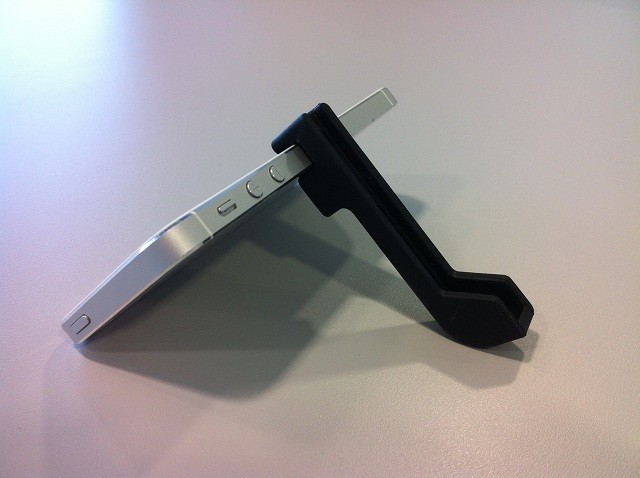 ​The Glif On My iPhone Back 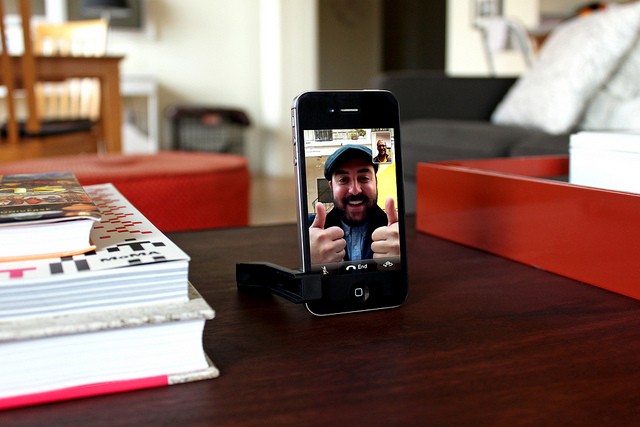 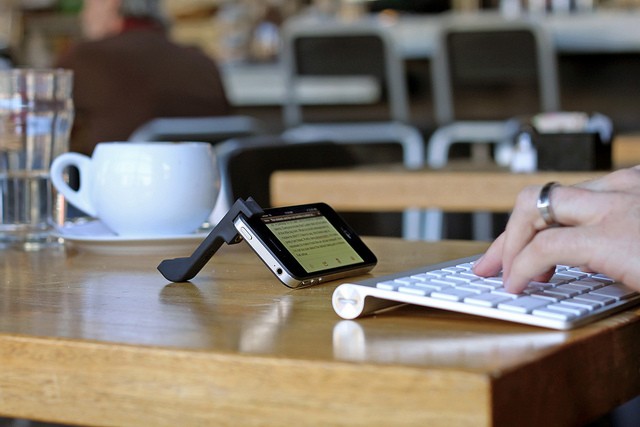 I wouldn’t be so much impressed if that was the only thing I could do with the Glif, but the cool dudes at Studio Neat had obviously thought this through and they didn’t disappoint.

Apart from very useful as a kickstand, the Glif has also a 1/4″-20 thread that allows you to fit your iPhone onto any standard tripod or camera mount! 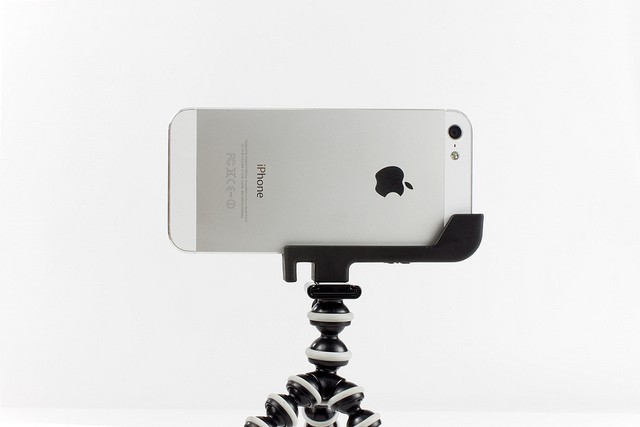 You have practically now 2 neat solutions in one simple tool!

​Is there any drawback?

The only drawback with this kind of ‘contraption’ (note that the Glif is not the only one that has the same problem) is that you have to take off your iPhone case, if you use one. But since you probably need to use the Glif only occasionally, this might not be a real problem.

Though if you need to use your iPhone with a tripod almost all the time, than my suggestion is either to do away completely with the case, or invest on one of those integrated cases like the Olloclip Quick-Flip Case I review recently.

Another thing is that when you mount your iPhone using the Glif, it might not be very stable if you are making big movement. For example, if you use your iPhone on a bike.

But here is where the Glif+ comes in handy.

These 3 muskeeters of iPhone tools are working in unison like a Mozart symphony, and the name is the Glif+.  I’ve showed you what the Glif can do above. 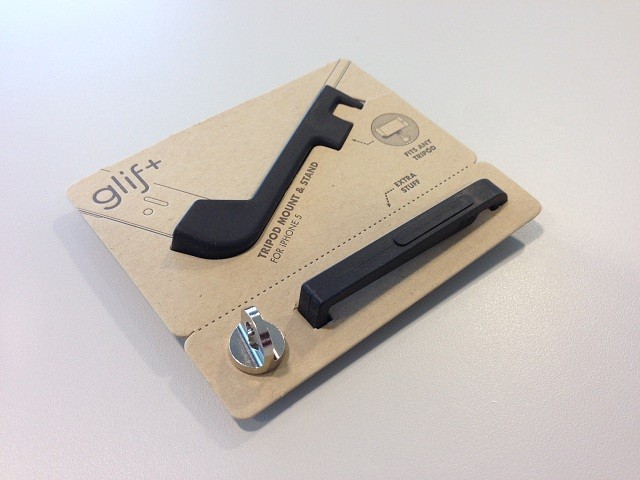 The Serif, which looks like a hook, enhances the stability of your iPhone when it’s mounted onto the Glif. It provides the ‘grip‘ that the iPhone needs, it ‘binds‘ the Glif and your iPhone together. And when you don’t need it, the Serif will slid easily ‘inside’ the Glif so you can bring it also everywhere with you. 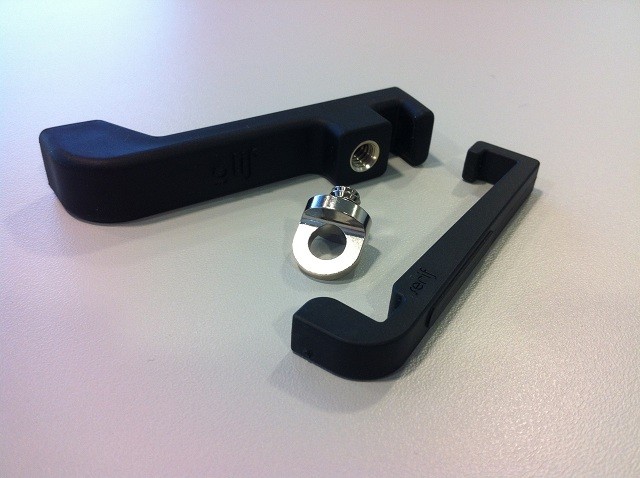 ​The Glif Serif and Ligature 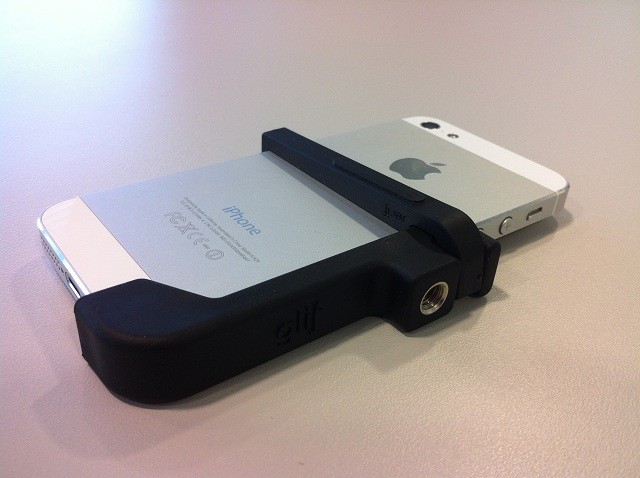 ​The Glif with Serif iPhone 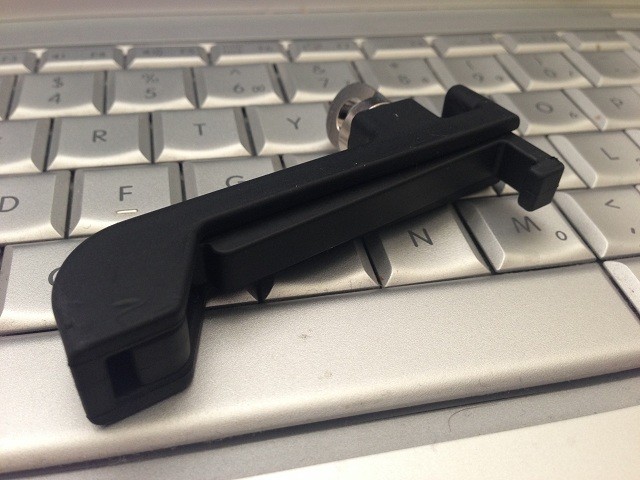 ​The Glif Serif Inside 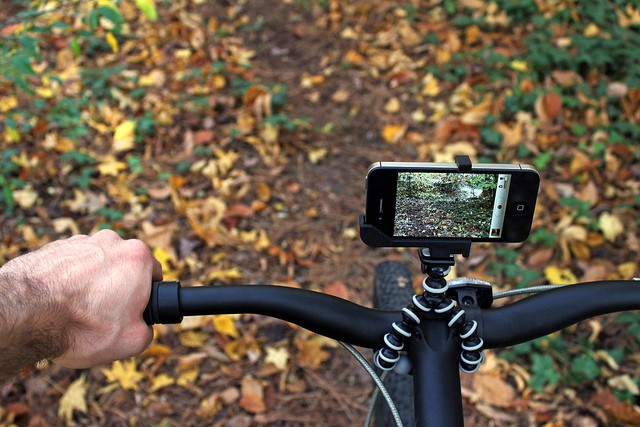 ​The Ligature is yet another simple solution that the folks at Studio Neat had thought of. It’s a keyring loop that you can screw into the Glif’s tripod thread. Now you can keep the Glif always with you, attach to your keys or loop it to your backpack, carabiner, purse, which ever you fancy. I myself attach my Glif to my bundle of house keys, and now any time I need it I just unscrew it and use it right there and then. Simple and neat 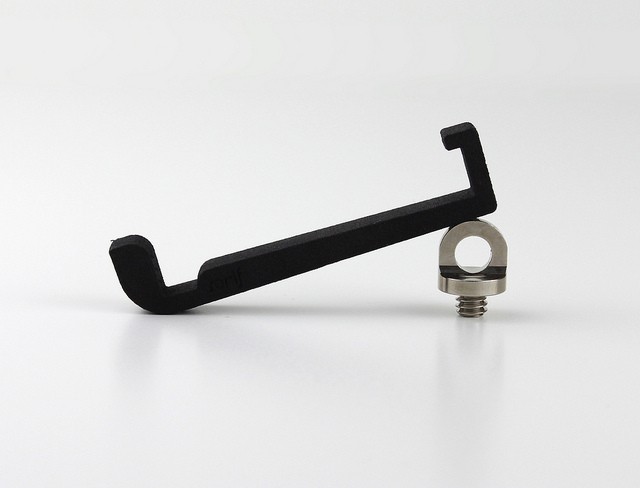 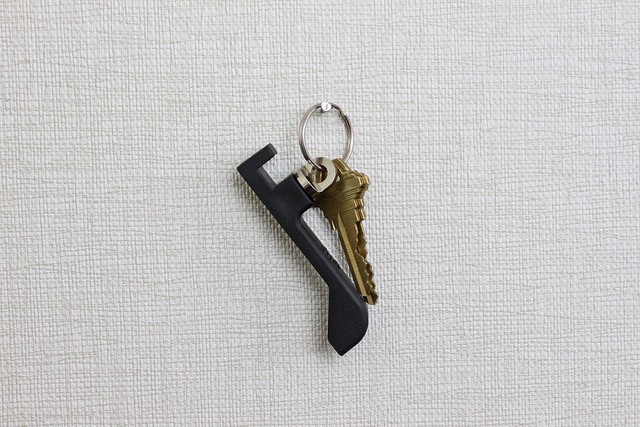 ​Designed and Manufacture in America

Here is what I found fascinating with the success journey of Studio Neat, it shows that if you have a simple and elegant idea, you can actually bring this into reality.  You can do this without re-mortgaging your house, borrow to a stinking banker or sell your soul to the devil!  You don’t even need to be able to speak Chinese! Because you can manufacture this ‘yourself’.  Check out the video below on how Studio Neat produce the Glif ‘in-house’.  They actually designed and manufactured the Injection Moulding with which they produced the Glif!

Many companies have ‘graduated’ from Kickstarter, but only a few of them have gone on and thrived as a business. Studio Neat is one of these companies (another one was Olloclip). Tom and Dan didn’t stop with the success of the original Glif and the Glif+, they kept innovating and created more neat stuffs.

One of their product is a cool looking capacitive stylus called Cosmonaut. Do not be deceived by how it looks, despite of its size, it’s actually quite comfortable, nicely balanced and precise stylus. A complete review of the Cosmonaut will be coming up soon. 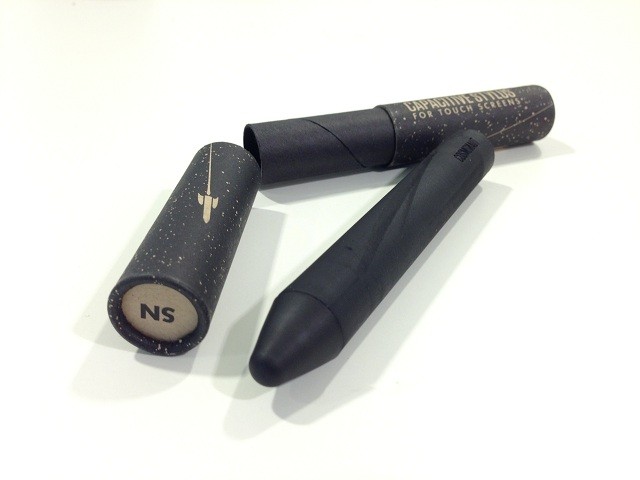 Studio Neat have recently tried their hands on app-making. And the result was a video creation app called Slow Fast Slow. It’s an iPhone App that allows you to shoot video in a high frame-rate and then manipulate its speed. You practically are making a slow-motion video with this app.  A full review of this app will also be available soon in this blog.

Last but not least, Tom and Dan wrote a book called “It Will be Exhilarating“.  Here is what they say about the book:

Studio Neat has been in business for two years. We have launched two successful Kickstarter projects, in turn paving the way for a new era of independent hardware manufacturing, and recently entered the software world with our first iPhone app. We have learned a lot in a short period of time, and wanted to share this information with the world. So we wrote a book.

​This book was written to offer guidance and inspiration for those charting a similar path, and covers topics such as running a small business, creating hardware products independently, launching a Kickstarter project, and tips for promoting your products. Everything is told through the lens of our own experience

You can buy the book at iBookstore or Amazon or in their website.

You can get The Glif from Amazon (iPhone 4 or iPhone 5 version).