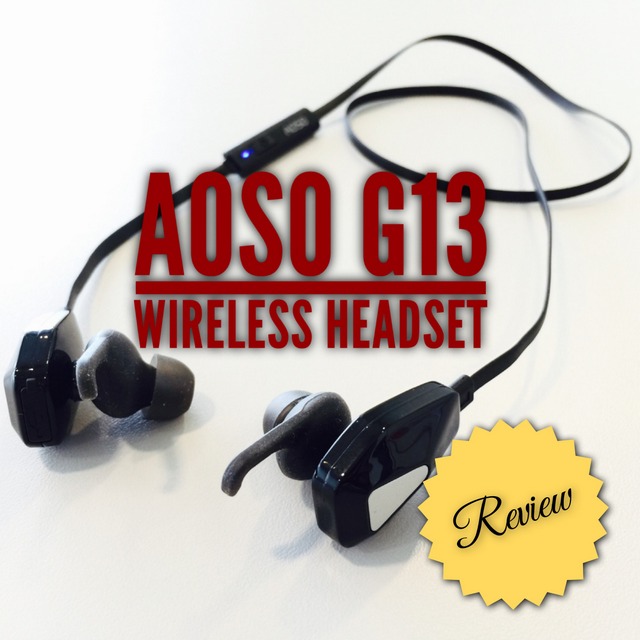 Not so long ago, you would’ve had to carry a ‘bundle’ of heavy electronics to be able to listen to your music wirelessly. At a mere 14 gr the AOSO G13 is indeed one of the lightest Bluetooth earphone I’ve reviewed.

The reason why wireless earphones used to be so heavy was because they housed the electronics inside a ‘box’ they put in the middle of the cable between the earpieces. This piece of box used to weigh heavily on your neck. Well this box is now gone, and nowadays they have moved the electronics and actually housed it on the earpiece itself.

Now you would think that that would make the earpiece feels heavier, but it’s not. As a matter of fact I don’t feel much different to any other wired earphones. Granted that it does look slightly bigger, but it’s pretty light. 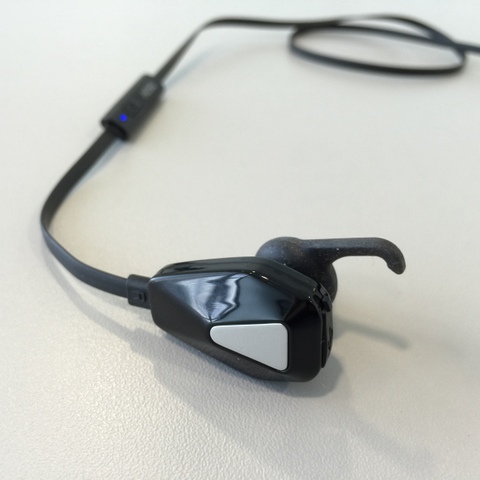 The two earpieces are connected with a reasonable length of a rubbery but strong cable. The rubbery material of the cable is good in preventing it to slip easily when you wear it over your neck. Yes you would normally wear it over your neck. It’s long enough that the monitor part just come down on the right hand side of your mouth, ready when you need to talk over the phone. Now admittedly I have quite a slimmer neck for a guy, so if you have a more muscly one the monitor might fall a bit closer to the back. It’s something that you might want to consider if you are planning to talk a lot on it. 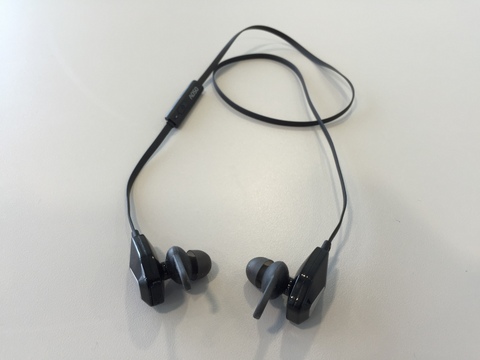 The AOSO G13 comes with 2 sets of earbuds: one big and small. The big ones are installed out of the box, and they are the one that I’m wearing. 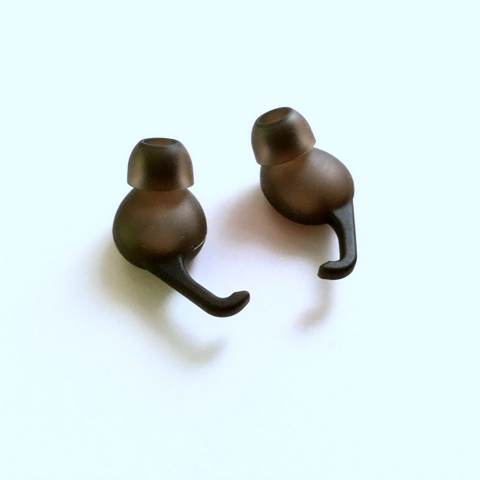 The cool thing about these earbuds is that each of them has a ‘wing‘ which will help the earpiece to stay put inside your ear, even when you have to jump or run around, as you do when you are say in a gym doing some training. 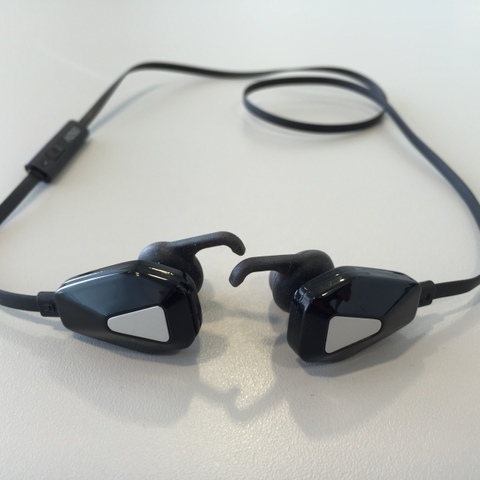 How does it work?

I must say it works quiet well. I have two iPhones (5 and 6) and I managed to pair the G13 with both of them easily. Yes you can connect to two phones, and use them both at the same time.

The G13 has what is called ‘smart voice prompt‘. In effect you will get some lady voice when some action takes place. So for example when you first turn on the earphone, you will hear a prompt saying ‘Power On‘. And when the headset acquires a Bluetooth connection to one of the phone it will say ‘Your headset is connected‘.  You will even get a warning voice saying that the ‘Power is low‘! How cool is that!

Another cool voice prompt is when you get a phone call from someone. It will actually speak the phone number of the caller, so you don’t need to look at your phone to know who’s calling (assuming you remember the number of course).

The remote has a couple of button as well as houses the microphone. I like it that the side of the remote that houses the mic falls correctly to the direction of my mouth when I wear it. Sometimes with other earphones you have to twist the remote around so you can speak properly.

On the same side of the mic hole is the main button. This button supports turning on and off of the headset, the Bluetooth pairing, music play and pause, as well as answering/ending calls. 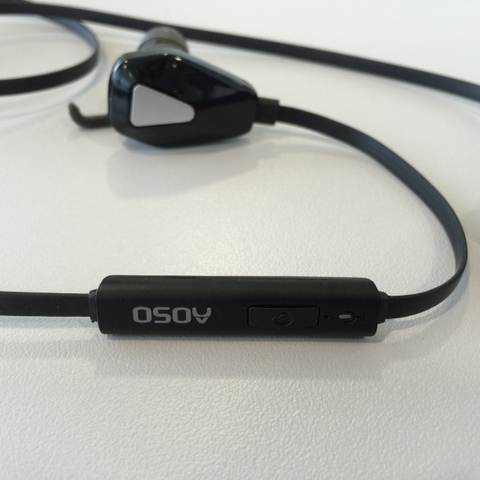 On the other side of the remote is the volume and skip track button. 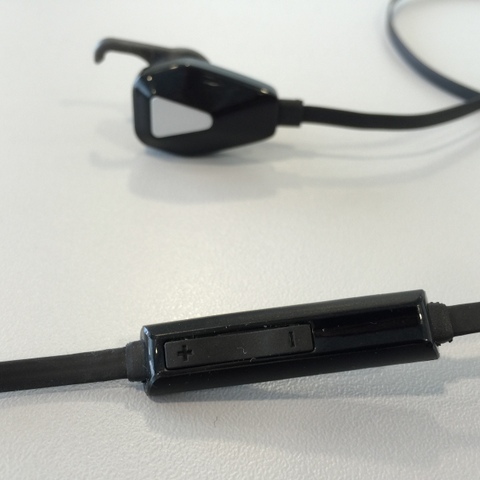 If you are an iPhone user, you will be able to call up Siri by pressing the main button in the remote and release it quickly in 3 seconds.

One functionality that is missing is the camera shutter release. Normally with my wired headset I can use the volume button as a shutter release remote for the camera, but not with this headset, which is a little bit disappointing as I use my iPhone to take picture a lot.

With the iPhone you can actually check the how much battery power you’ve got left in the earphone by looking at the battery icon next to the Bluetooth icon. This is very useful to see if you need to recharge the unit.

And speaking about rechargeable battery, the G13 comes with a mini USB charger cable. It takes around 2 hours to charge fully, and the battery lasts about 6 hours non-stop music listening. It won’t last the whole day, but it should be enough for one gym session, or a marathon run. 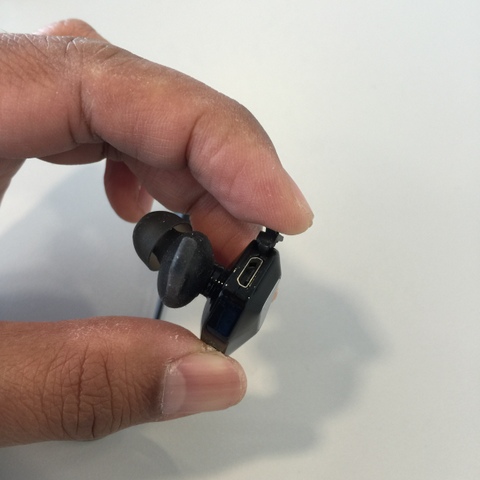 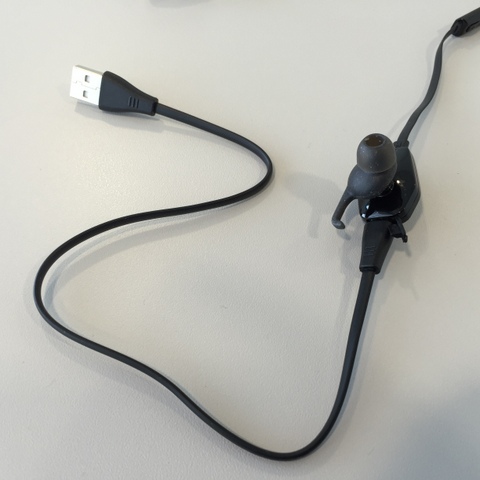 How does it sound?

Well, let’s be honest, the G13 won’t bring your house down as you say. But for £20 it does sound quite decent.

The model features the APT-X wireless technology, which means you can enjoy a High Definition sound in continuous streaming.

The drivers manage to reproduce a decent low bass range, although it often sounds muffled.

When it lacks in its low ranges, the G13 makes it up with a pretty good mid and high range.

As far as the voice concern, like when you hold a conversation during a phone call, I can hear the other party’s voice pretty clear, although they reported that my voice sounded low in volume until I hold the mic closer to my mouth.

The AOSO G13 is a little bundle of wireless magic, which has more than you need (and even more) for the price that you are paying. I like very much the form factor, how light it is. I’ve been using it now on my daily commute because it’s easier to carry it compared to my big and heavy on-ear phones. To be fair, I’ve only been using it to listen to Podcasts, Audiobook and casual music listening.

I’m a bit disappointed that I can’t use it to take a picture with it. But I suppose not every body needs these functionalities.