Apple iOS 7 – What’s In It for iPhoneographers 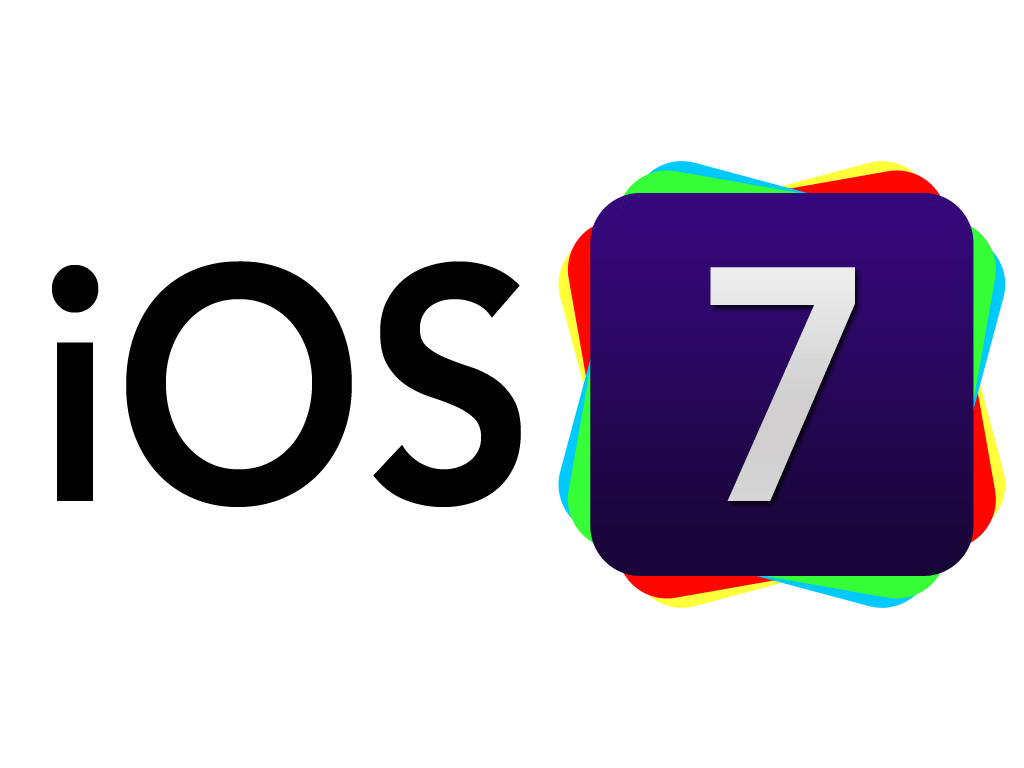 Yesterday, 10th of June, Apple began its WWDC (Word Wide Developer Conference) 2013. An annual conference catered and aimed normally at Apple’s Developer. And as per usual, the conference started with a Keynote where Apple would traditionally highlights its achievements from the year before and most importantly announce new things that will come out from Cupertino ‘Foundry’ later on in the year. 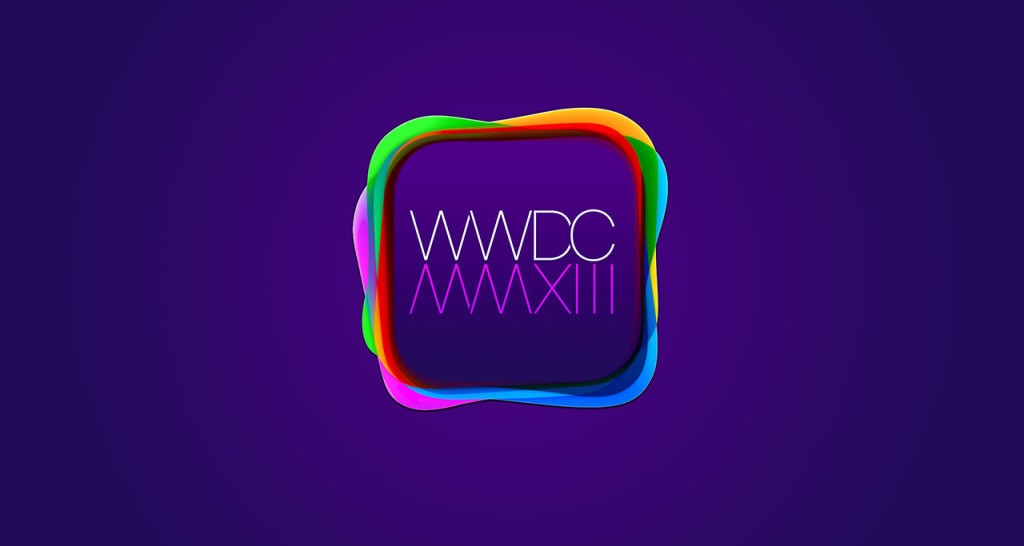 This year’s WWDC Keynote was stream live on the Internet, such as an important event this one that Apple has taken an extra step to make sure that the ‘whole world’ were watching and listening. And after all the negative press from the media and the general public since the iPhone 5 launch last year, who can blame them. People had said that Cupertino had lost its ‘mojo‘, stuck in the passée, and couldn’t swing its ‘design magic wand‘ to innovate and create something new. Well, by today, the world would know that Apple’s design machinery and engine had not been dormant, and that they had been working very hard to get their ‘mojo’ back, even though apparently it took the design team AND the engineering team TOGETHER to make this happen. In my opinion, anything less than this effort wouldn’t be as successful, they were forced to combine all their knowledge and expertise to create something new in just a matter of months. Anything less than this would mean death for Apple, at least on the mobile site where competitions from Android and Windows Phone had been the thorn on Cupertino’s back-side for a long time.

So, what can we expect later on this year from Apple? You can visit Apple website to watch the whole Keynote. There you can also see some previews of each new thing that were mention at the presentation. Things like the new OS X Mavericks, new MacBook Air, the iWork for iCloud (Apple’s answer to Google Docs), the new iTunes Radio (watchout Spotify!), the most awesome Mac Pro (I’m drooling on my desk right now), and last but certainly not the least the new iOS 7!

Here I want to talk specifically about the Photography side of iOS 7, after all this is what we are iPhoneographers care about. Although since the Photography is part of the new OS, it’s hard not to touch, at least a little bit about the iOS 7 itself. Needless to say, they have been redesigned the whole thing entirely. The keyword that was said over and over again throughout the whole presentation was ‘Simplicity‘ which according to Apple is not just taking out the clutters but it’s about ‘bringing order to complexity‘. 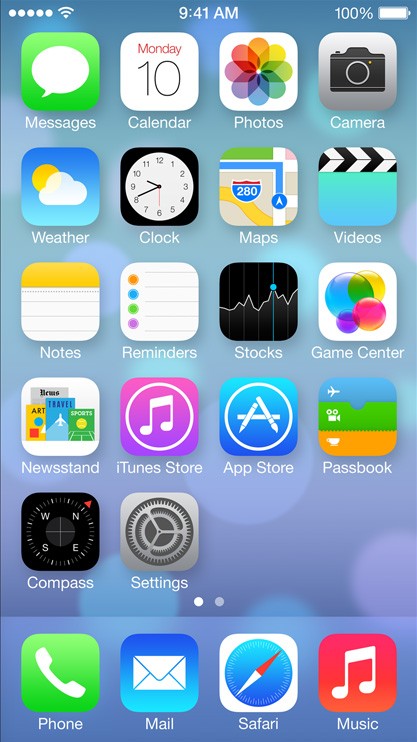 The User Interface, the icons, the look and feel, now has the ‘Flat Look‘ similar the Windows Metro UI, but with more subtle colour (read pastel) and lots and lost of transparencies (nice). One evidence that shows the combination of design and engineering is for example the Parallax View of the icons in relation to the background. You have to see it with your own eye to understand this, but basically as you tilt your device the icons would tilt respectively revealing some part of the background, hence creating the illusion of ‘depth‘.  You can watch Sir Jonny Ive talking about these here.

There are three major area in regards to Photography that Apple had worked. The first one is the Camera App itself, the second one is the Photo Album and the last one is Photo Sharing. Let’s have a look at them one by one.

Camera App – Flat Look, Swipe to Change Mode and something else new

Inline with the rest of the OSes Look and Feel, the Camera App has been revamped to sport the Flat Look. As you can see on the screen shot below, gone are all the bevelled edges. The flash and front/back camera selection are still at the same corner, but the HDR button have been moved out of the Option menu out directly on to the view finder. I suppose this will make it more readily accessible during photo shooting. 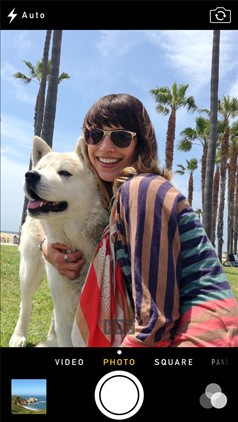 And then here is where the simplicity comes to play in taking photos, to change shooting modes, you just swipe left or right. There are 3 of the original shooting modes, Video, Photo and Pano, plus a new Square mode.

Yes, Instagram influence can be even felt here, and more so with one new feature of the Camera App, which is … wait for it .. Filters 🙂 I suppose I shouldn’t be too surprised, every single camera app and their grandma is incorporating filters as a built-in feature now.
There are 8 type of filters you can choose; some for Black and White – Mono, Tonal and Noir; and then for those ‘Instagram‘ look – Fade, Process, Transfer and Instant; and the last one is some kind of picture enhancement type called Chrome. You can see the effect for each of this filter on the Gallery below.

These are all I can see that are new on iOS 7 for the Camera App. Not much enhancement to be honest. Nothing that we can already get from a decent Camera replacement app out there.

I’m sure you know the story, you’ve take hundreds if not thousands of photo, and when you want to find that one photo of your child doing something specific, you have to go through rows after rows of photos just to find that one you are looking for. Well, not any more with iOS 7!
With the new Photo Album, photos will be organised according to Time and Place. Three types of ‘smart grouping‘ are available. First is the ‘Year‘ group. Selecting this option will group all your photos into (very) small thumbnails, it looks like a kaleidoscope, according to the year when the photos were taken. Interestingly, you can actually slide your finger across the thumbnails and it will popup a bigger version of the photo, which then you can select. 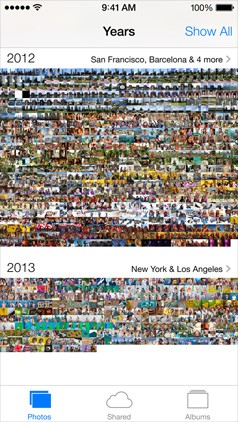 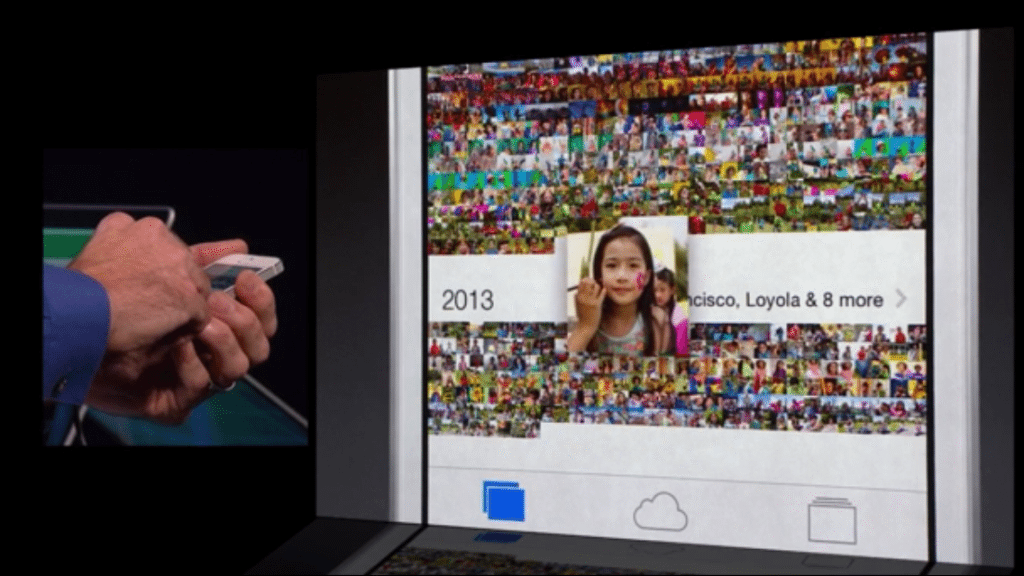 The next grouping is called Collections. These are your photos organised by places across multiple timelines. So for example you will have photos taken in London all in one place. 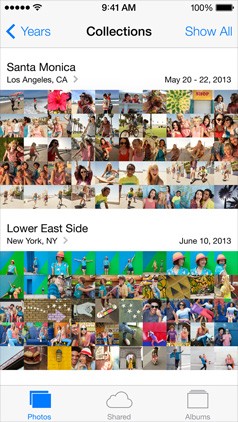 Last grouping is called Moments. These are your photos taken on the same location at a particular date. 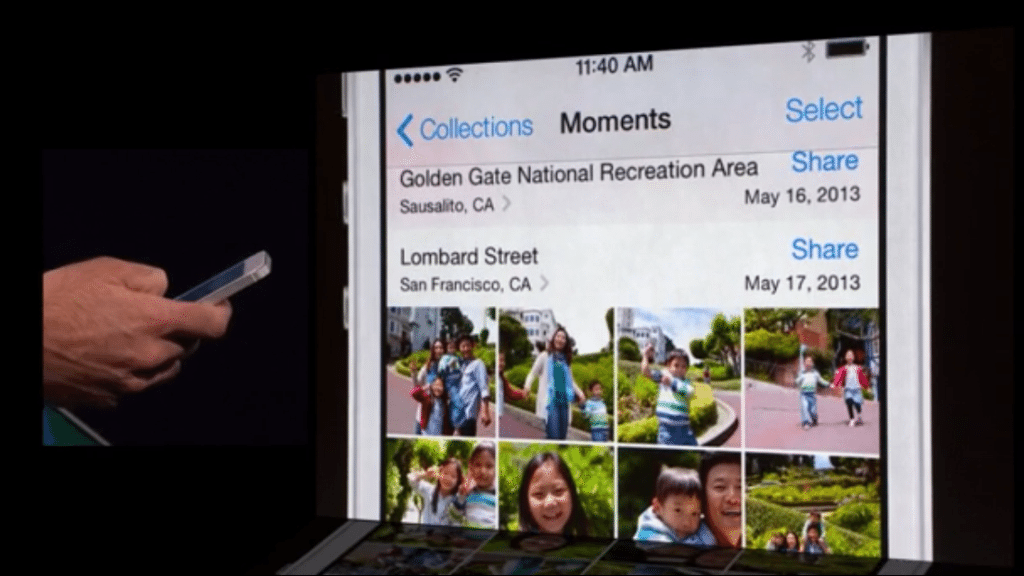 All of these will give you some kind of ‘Zooming effect‘ as if you were travelling through time and places. It can be challenging to keep travelling once kids come along but I think journey is more of a frame of mind, that you are willing to leave your comfort zone and cast off to explore – if you have to låna pengar snabbt, enkelt, tryggt – jämför lån direkt to be able to do it.

Now, I won’t start to claim that this is an entirely new concept, in fact this feature has existed as a default on many other Photo Album app on iOS and on other platform. So, once again, Apple is playing catch-up with the others. Though something like scrolling your finger on those thumbnails to reveal a photo behind it, is quite a new one.

One last important thing to consider before you jump up and down with joy, to make this ‘magic’ to happen, the app is utilising the photo’s meta data called the EXIF which stands for Exchangeable Image File Format. It’s a standard Meta Data (machine readable) that can be embedded to a digital photo and will provide additional information about the photo, e.g. Date/Time, Size and Resolution, ISO/Speed/Exposure, etc. This EXIF data will feed the Date/Time information of the photo so it can be grouped by Date. The problem is, if you use some Third-Party photo app to edit your photo, sometimes they don’t save this info back to the resulted image, hence you loose the information. Below is how EXIF looks like viewed using one of my favourite photo app Camera+. 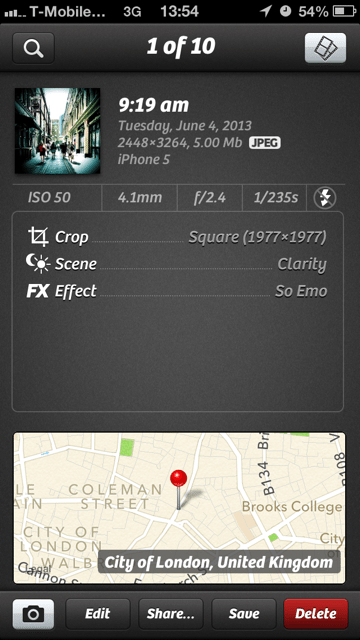 In addition, to group the photos by place, you need to turn on the Location Service (the GPS) on your Device. Without this turned on, the camera app wouldn’t be able to determine where the photo is taken. And even when you have this service turned on, there is always a chance that you would be out of reach from the Location service, like underground for example, and the camera app will still not be able to the the correct location, if at all.

So these two components must exist in the photo to enable correct grouping.

Do you remember that Samsung Galaxy Ads where two people can seemingly share photo instantly between them? Well, AirDrop is Apple’s answer to this so called S Beam feature. When you want to share a photo, you just choose to share it and the Share sheet will appear where you can choose where to share to. Some choices we have already familiar with, like Messaging (SMS), Email, Twitter and Facebook, but the new addition is the iCloud and the AirDrop.
Sharing to iCloud means that now you can choose which Photo Stream you want to share it. And here is a new thing, you can have a Shared Photo Stream, which means other people can share their pictures to the same Photo Stream. 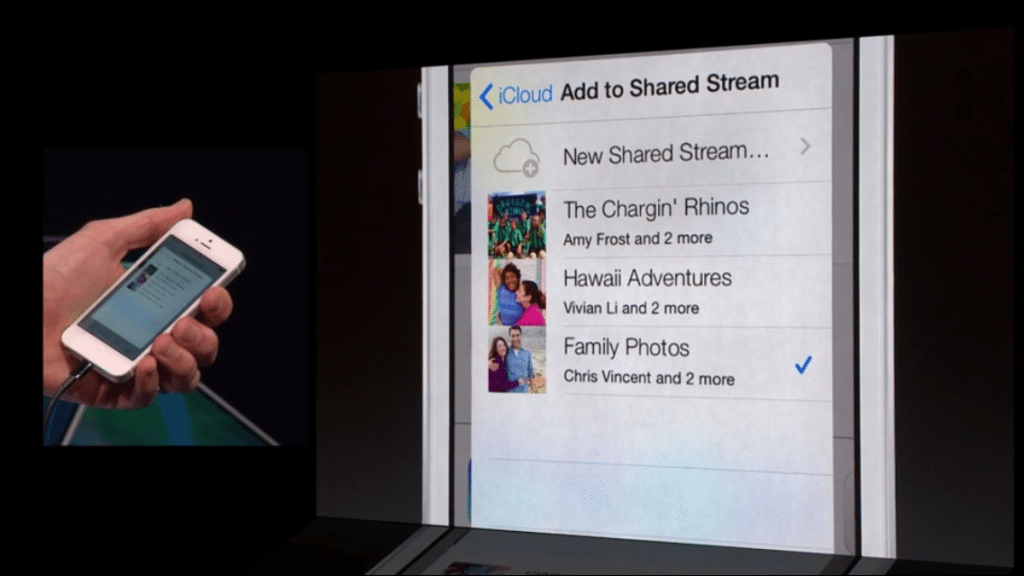 The Share sheet will also show you everybody in your vicinity (via Bluetooth), or using the same WiFi connection that has their AirDrop setting Visible. You can then share your photo directly to these contacts and each of them will receive it immediately, just like the S Beam.
By the way, the AirDrop functionality doesn’t work only with photos but also videos and documents too. Here is a hope that somebody will enable sharing for song files too 🙂

It’s funny how things slowly go back to how it was before. In the olden days, the time before Smartphone, we used to be able to share ‘anything’ to ‘anybody’ including songs we have in our ‘Feature’ phone just by using Bluetooth. This was before iPhone ruined it by locking the Bluetooth on the device and reduce it to a mere feature to link to your Bluetooth headset.

The Shared Photo Stream is quite an interesting feature of iCloud though. Using this Photo Stream, member of families, or circle of friends could share photos into the same ‘pool’. It could be useful also for events where the participants can share photos they take during an event into a public shared space.
These are the features we can expect included in the new iOS 7, which should be coming out after September this year. Admittedly they are not a major overhaul from the previous version. But seeing that iOS 7 itself is ‘the biggest change since the introduction of the iPhone’, maybe we can overlook this and hope that there are more improvement on the Hardware side later on this year. Coming up … iPhone 5s … or 6?

So, what do you think about the new iOS 7? Are you happy with it? Do you think Apple has done ‘enough’ to dig themselves out of its own grave? Or do you think they still need more work to do?  Let me know on the comment!