All About Vineography: An Interview with Pinot – a Master Vine Artist

Probably many of you has been using Vine for a while, but for you who doesn’t know what it is, Vine did for Videos what Instagram did for Photos. It’s a Social Video Sharing app where you can take 6 seconds video, which can comprise of smaller clips, and share it to your followings. It is by no means the first, but just like what Instagram did to photo sharing, Vine has revolutionised the video sharing arena by making it easy and fun. Many other apps before it had tried, including Viddy, Vlix, Cinemagram and Socialcam, but Vine seems to get the most traction in term of user acquisition. This success has also created a spurs of other social video sharing popping up left right and centre, trying to ride the momentum. These new apps include no less than Instagram which has released its new video capture/sharing feature a while ago.

From the depth of Vine, many individuals have risen to the top. With pattern not dissimilar to YouTube, these individuals have made their own name by doing very creative things with those 6 seconds, sometimes incomprehensibly beautiful. They have pushed the limit of Video creation to the next level and created something entirely unique and enjoyable to watch. These Vine artists, whom followers are in the thousands, they often called themselves Vineographers, and the genre – Vineography.

I have one here, a friend of mine, whom is widely known as one of the best Vineographer, his nickname is Pinot, and I had an opportunity to talk to him about Vine, his rise to fame, his works and the new Instagram video.

Please tell me your name, where you from, what’s your background and what are you doing at the moment.

My name is Pinot, Wahyu Ichwandardi in the passport 😀
I am from Jakarta – Indonesia, but I have been living in Kuwait for the past 6 years. My background is graphic designer and animator. I am a motion graphic designer in TV station (in Kuwait).

What is Vineography and how long have you been doing it?

Vineography is basically videography using the character (or limitation) of Vine app. 6 seconds loop with no access to Camera Roll, those are the character of Vine. I’ve been doing it since its release in January 2013.

Though it requires preparation, basically Vine is like doing doodle on napkin or tissue paper. Instant, whenever wherever you are, you can share your thought and idea with audio and video medium. And Vine is like a small playground with limited facilities/options, forces us to do something differently, old school cinematography, old school special effects and back to the old days of 2D animation. Pure analog, no digital required.

What I like about Vine is, it captures the beauty of human mistakes and provides space for permissive error.

Why did you decide to try something different?

Because it makes you always try something new. It gives guts to face any uncertain possibility.

What would be your normal creative process? What’s your secret?

With Vine? First of all, I do a quick brainstorming with my kids for the idea (Pinot often involved his kids in his creative process). Then while I design the story, I also find the best possibility for production, technique and material. 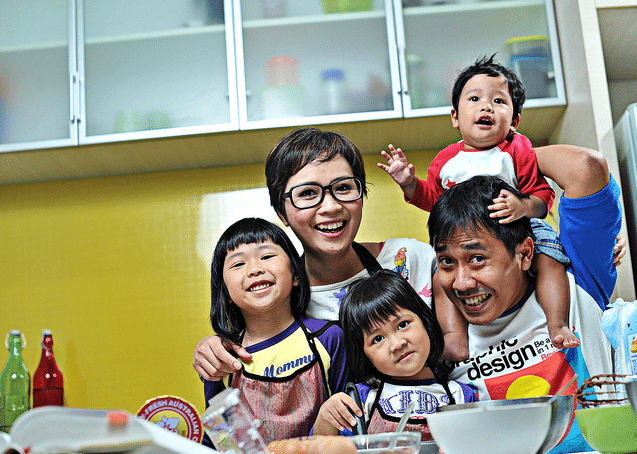 The secret is to keep doing something that makes people ask “How did you do that?” or “Do you use digital tools for this?”

To do that, I have to relearn how the old school cinematography or effect artist do their special effects before the CGI (Computer Generated Imagery) era. Dennis Muren from ILM has so many magical secrets that can be apply on Vine.

Any tips and tricks?

Be patient and consistent with the idea. Keep practicing for better result. And remember, Vine provides large playground for permissive error.

You mentioned that there were so many video sharing app that had been around before Vine, for example Viddy comes to my mind as one of the best contender, but why do you think only after Vine was released that we could say video sharing has finally become mainstream?

Because it’s ‘from’ Twitter (Vine was acquired by Twitter in 2012). Because it has a close relationship to and part of the social media giant. Previously, apps like Viddy and Socialcam were just third-party services that can stop any time, which is what has happened to Vlix.

What do you think about the new Instagram video?

Instagram was build for photo. Its nature is photo. In this early stage, all I can say is Instagram video still looking for its identity. It confuses the users at the beginning. They don’t want to watch video, they want to see still photo & don’t want the video eats the bandwidth a lot. That’s what ‘AutoPlay’ feature comes in handy. Ironically, most of the people I know always keep the ‘AutoPlay’ off.

For me, Instagram video is a moving photo with audio. Nothing more.

Instagram just released a new version which added the ability for the users to upload their own video from the album. What do you think about this, and how is it going to impact the video social sharing scene?

What do you think about the Video Social Sharing scene in general?

As personal medium of expression? Not many people are used to ‘tell a story‘ with video. It requires story, editing, audio etc. There were so many social video apps available before Vine, but it’s not as popular as blog. It’s effective for watching others’ creation, but not for creating video material.

Any message you want to give to the readers?

Know how to tell in 6 seconds by summarizing the idea. Be consistent with the style at the beginning, keep trying while slowly perfecting the technique.

As you can see from examples of Pinot’s work above, his creations are truly inspiring.  Against all the limitations, he managed to create something truly wonderful, I think that takes a real artist to do that.

Now since Instagram has allowed you to upload your own video, we should see more awesome creations coming out of Instagram.  If you’ve seen one, I would love to know, ping me on the comment.