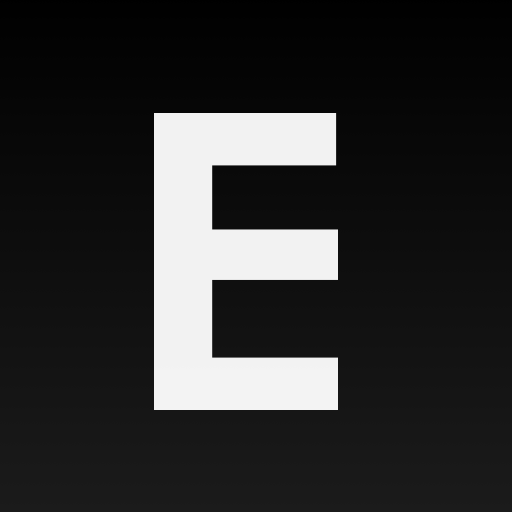 Here is the difference between EyeEm and other Photos Sharing apps, one that set them apart – the founders are themselves very passionate about Photography. When somebody is passionate about what he/she’s doing, it shows on the quality of his/her works. This is basically what EyeEm is about, a fruit of passion coupled with an eagerness of creating a strong community.

A couple weeks ago, EyeEm released a preview video of their new version of EyeEm which were going to be coincide with the public release of the Apple new iOS7. Listening and watching Lorenz Aschoff (one of the founder and Head of Product) talking about the new version and the new features had made me quite excited, although I must say that I wasn’t quite sure about some of the changes in the design that he was explaining about. I didn’t have the iOS7 and the app at that moment so it was quite hard for me to imagine it in reality.

But now that I’ve downloaded the new app (it finally came out just a few hours ago) and watching the video again and actually trying out for real has made quite a huge difference! I have to admit, it is quite a beautiful design in term of User Experience and Interaction.  Just like a Diva that has just gone under a Facelift, the new EyeEm has shed some excess weight, and tighten up everywhere.  In addition it has also put on some fresh make-up that will make London Fashion Week model envy.

As Lorenz had explained in the preview video, the team had embraced some of the design principal and feature of iOS7 and incorporate them nicely within the new app. 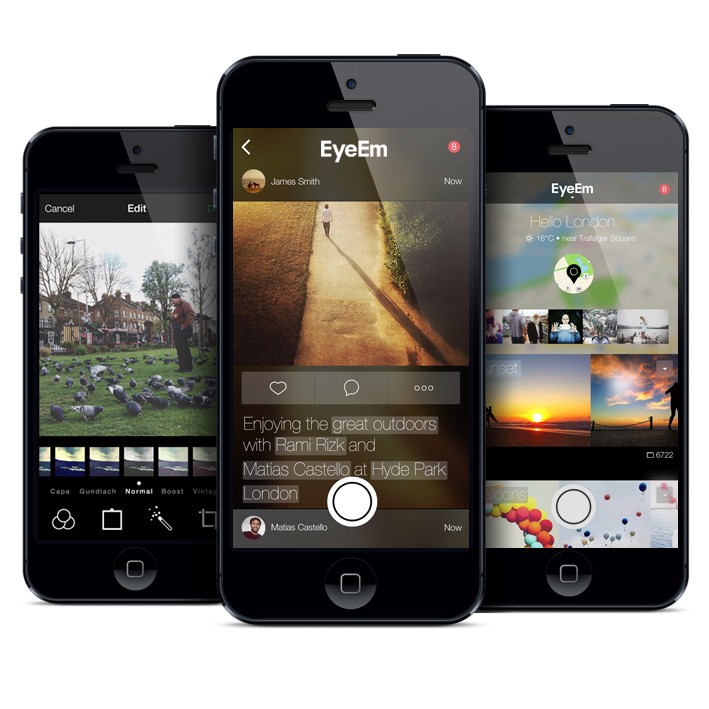 Let’s take a look some of those changes:

1. Circle Avatar Icon
iOS7 has got rid of its Square Avatar Icon, and replace it with a Circle one. You can see this particularly in Contacts app where you can add photo of your contact. The new EyeEm is also now using a circle icon for the profile photo and the list of likers. Two apps came to mind when I saw this, one is Google+ and the other is Path. 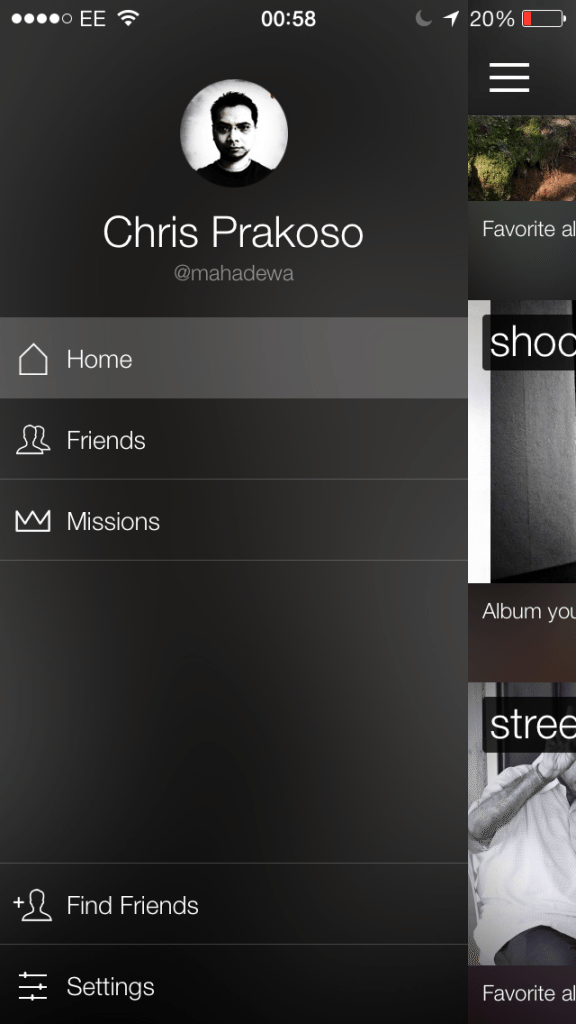 2. Full Width Photo with no surrounding margin
Previously, each photo, either individually, in an album mode or in a list mode would have margin around it, which creates white space between the photos and the screen edges. The new EyeEm has got rid off these margins. Now all the photos are touching each other without space between them or to the edge of the screen. In addition to this, the Like, Comment and Other icons have been moved below the photo on its own bar. They used to be located at the bottom part of the photo which was not only obstructing it but also sometimes very hard to find.  I personally like this format, it’s just feel that it’s all 100% about photos.
(And by the way, I just downloaded a new version of Instagram, and they are doing the same thing.) 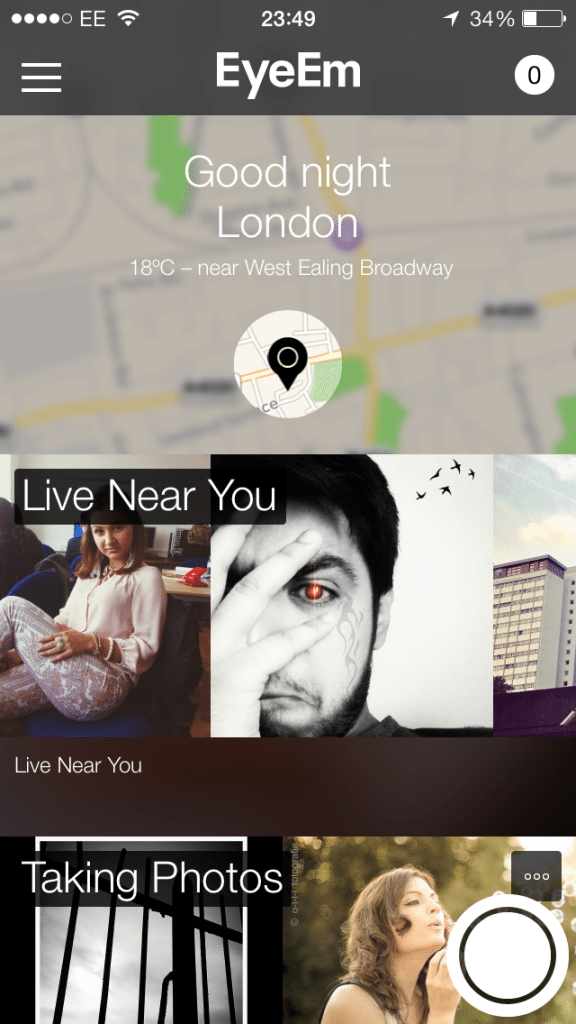 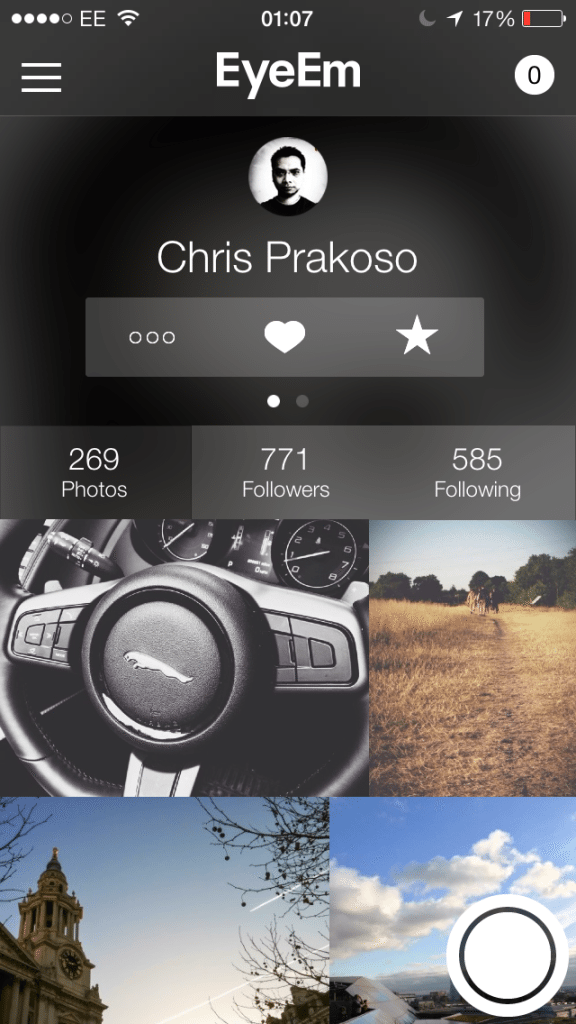 3. Contextual Zoom In and Out.
When you are in iOS 7 Home Page and tap on one of the app icon to open it, you should notice that the whole screen will do a ‘Zoom In‘ as if you were in Google Maps and zooming in to the Street Level. It does the opposite when you are exiting the running app and wants to go back to the Home Screen, the whole user interface will do a ‘Zoom Out‘. Similar thing happens in the iOS 7 Photo Album when you tap on a photo to show it and back.
The new EyeEm has adopt the same navigational user experience. For example when you are in album mode and tap on one of the photo to view it, the whole screen will ‘Zoom In‘, and when you tap on the the back icon – the screen will ‘Zoom Out‘ and ‘Slide into‘ where it was before (among other photos). I love this idea on the iOS7 photo album and I love it here too. It gives you a sense of context and it makes it easier to find where you were initially.

4. Ambient Background Colour.
This is probably one of the coolest thing I’ve ever seen in a Photo Sharing app. Do you know about the latest thing on TV Set where you install some ambient lights at the back of TV? These lights will basically project different colours into the surrounding areas of the TV ‘according’ to the colour shown on the TV at that time. So for example if you were watching ‘Saving Private Ryan‘ you will have mostly Grey colour being projected around your TV 🙂 Some action movies with a lot of explosion however would project more colourful ambient colours.
This is basically what you are experiencing in the new EyeEm. Every photo, when viewed in a stream, individually will have its background changed dynamically according to the colour spectrum in the current photo. So for example: if you have a photo about sunset – the background will adjust and change to red/orange colour. If you have a black and white photo – the whole background will become darker. Check out some example screenshots below to understand what I mean.

5. Like by double-tapping the photo.
Very simple change but it’s such a time-saver.

6. The Photo Posting screen has been redesigned too – taking a hint from iOS7 design.

Unfortunately it seems that in an effort to get the the app out of the door, EyeEm has left out some features, so far here are what I’ve found:
1. There is no way to edit photo that has been posted. There used to be an edit button available, which now doesn’t exist.
2. There is no ability to add albums (A.K.A Tags) to your photo.
3. You can’t seem to share your photo to FB or Twitter after the photo has been posted, although you can send it to email of copy the link … and send it through your usual social networks.

I’ve contacted EyeEm Team and asked them about these issues.  They came back to me and said that for this initial version they had to disabled some features, but they also assured me that these issues have been fixed and will be available on the next version (which will be coming out in a couple of days).

I appreciate the urge for app developer to time their new app release with the Apple public release of iOS 7 and the new iPhones.  Heck, all the apps under the sun are doing it.  I have tens of app updates show up on my screen every day since I upgraded my iPhone to iOS 7, some apps releasing new updates once everyday trying to iron-out the issues.

So, if you can’t wait to see how beautiful the new EyeEm is and can live without the missing functionalities, go ahead and download it, otherwise just sit tight and wait until the next update.

All in all, job well done for EyeEm Team!