How to delete all your photos and videos from iCloud Permanently! 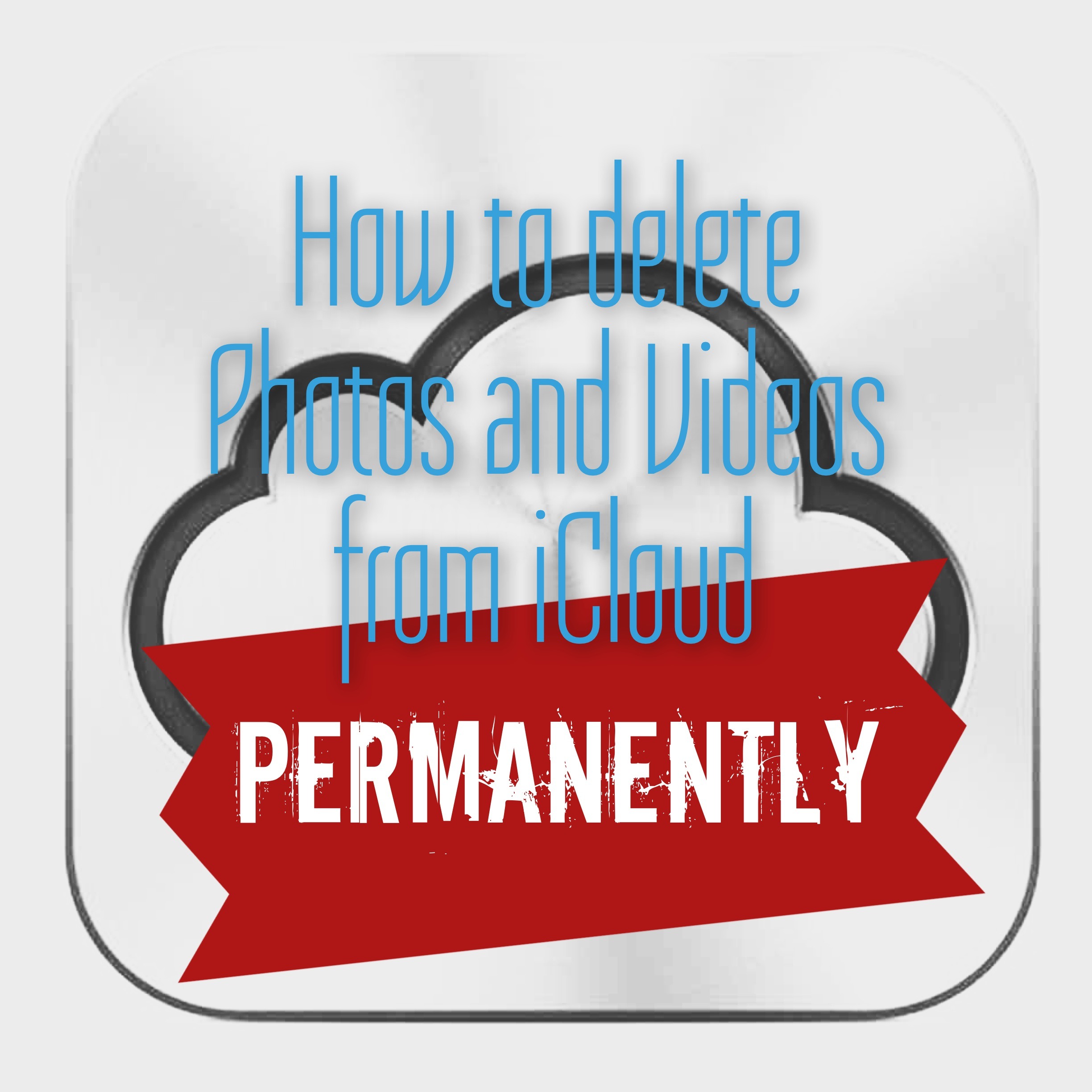 By now you must know the big news about several Apple iCloud accounts that belong to some celebrities which were being hacked. The hackers managed to run away with some apparently ‘you-know-what‘ photos of these famous female celebrities. The world suddenly erupted with all things about Apple and its iCloud service, accumulated in a fresh fear that the cloud service’s security wall was not strong enough to ‘hold the fort’. This assumption was subsequently dismissed by Apple in its official press release, stating that none of this incident were caused by a breach in any of Apple’s system including iCloud or Find my iPhone. That’s a relieve! 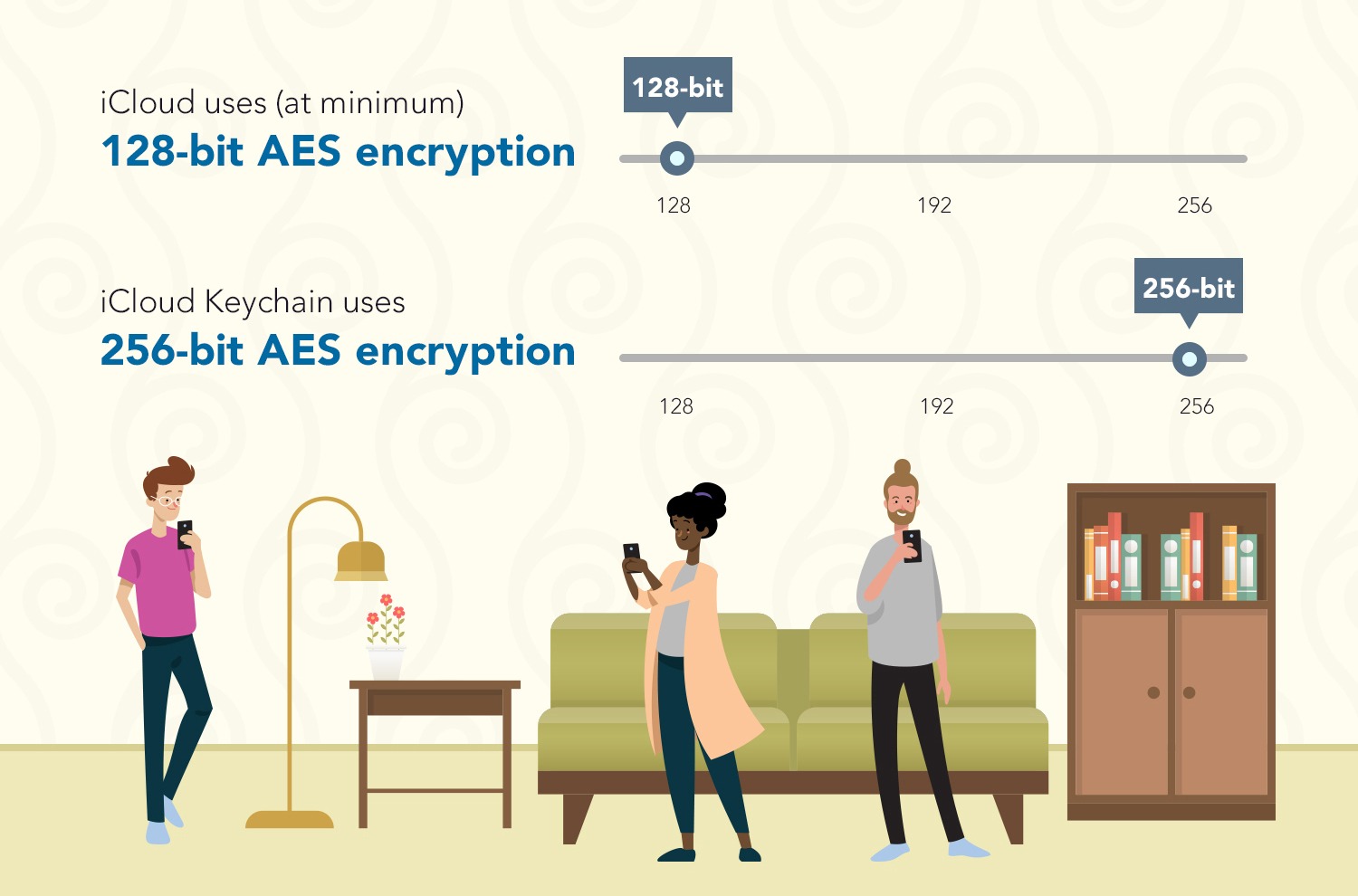 You can read how those accounts could get hacked and the advise on how to prevent yours to become a victim of the same scheme in the same press release, or for more elaborate explanation you may incline to read this notes.

The good things we can get out of this commotion were that, first of all it made people re-evaluate their online security, and secondly, and probably more importantly here is that it raised awareness about the iCloud service itself.

Some of you might understand about what iCloud service is really about and what it does to your data, but for majority of users, iCloud is just that … something in the cloud. Many users might not even aware of its existence. That’s why this week’s incident got so many people worried, for obvious reason.

So, let me explain what iCloud service is, briefly and then I will tell you how to delete your photos once and for all from iCloud.

​What is iCloud and what is it good for?

If you have iCloud Backup turned on, you will be given a free 5Gb backup storage at iCloud server where you can backup among others:

Now, pay attention with the following items: My Photo Stream, iCloud Sharing and Camera Roll iCloud Backup; because they are where iCloud stores your photos and videos. 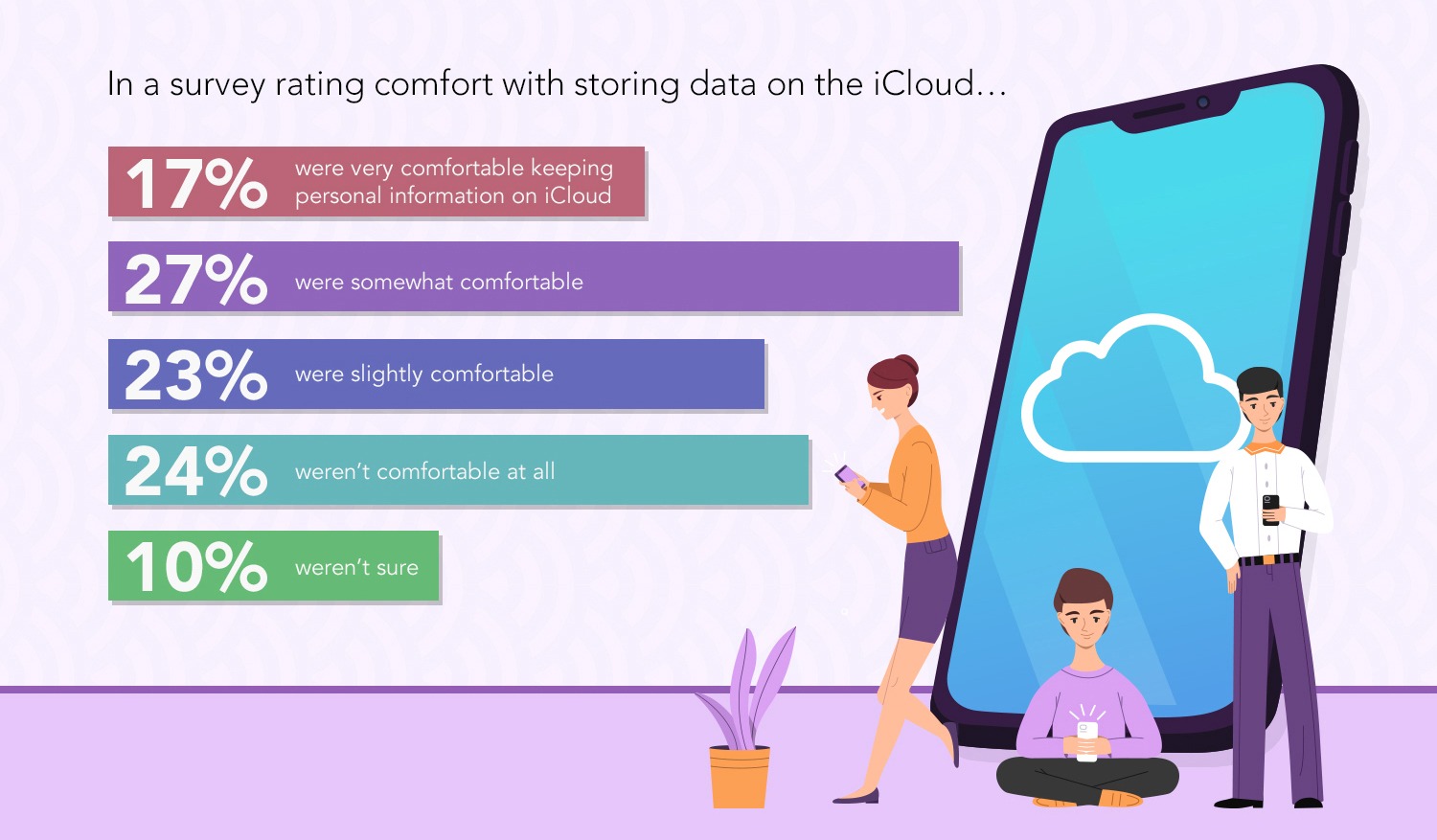 ​Why do we need iCloud?

Your iCloud is basically a copy of all important data pertaining your account and your iDevice. So if, God forbid, your iDevice got stolen or broken down somehow, basically any incident or accident that needs a full replacement of the iDevice, you will be able to restore ‘everything’ you had before to the new iDevice, just like nothing happened.

This also happens when you upgrade your iDevice to a new one, when you turn on your new iDevice, sign-in with your existing Apple ID, all the data in your iCloud will be restored back to the new device. It’s make it very easy for people to upgrade.

You can check your iCloud account by visiting iCloud.com and sign-in with your Apple ID.

In regards about Camera Roll backup, well, it’s just a good way of making sure that all your photos and videos you took are backed up safely. Again in any event where you lost your photos, maybe your young one plays with your phone and accidentally delete your photos (it happened to me), you still have a backup and will be able to restore the lost photos (provided that they had been backed up).

In short, iCloud is very useful and as a matter of fact a must have for iDevice users if you want to use it sensibly.

​About My Photo Stream

My Photo Stream is a new feature recently added to iOS devices, which also using iCloud for storage.

If you have My Photo Stream feature turned on, every time you take a photo, it will be automatically ‘sent’ to all your other devices (iDevices, Macs and PCs). Obviously you need to turn this feature on as well in those other devices to make this ‘magic’ work.

Let’s just say it’s an easy way to transfer your photos between devices.

Unlike the iCloud backup however, My Photo Stream only stores the newest 1000 of your photos on the iCloud server, and for only 30 days.

It allows you to share your photos and/or videos to anybody, just by including their email address, by creating what is called a Shared Streams. These people that you have included as ‘subscribers’ will be able to see the photos/videos you’ve shared in their device’s Shared Streams. You can see them also obviously in your own Shared Streams.

Photos and videos that are ‘sent’ to these Shared Streams will be stored in the iCloud server, forever, until they are deleted. The only restriction is that you can only store 5000 of them.

This is a good way of quickly sharing your photos to your friends and families, especially when they also own an iDevice. 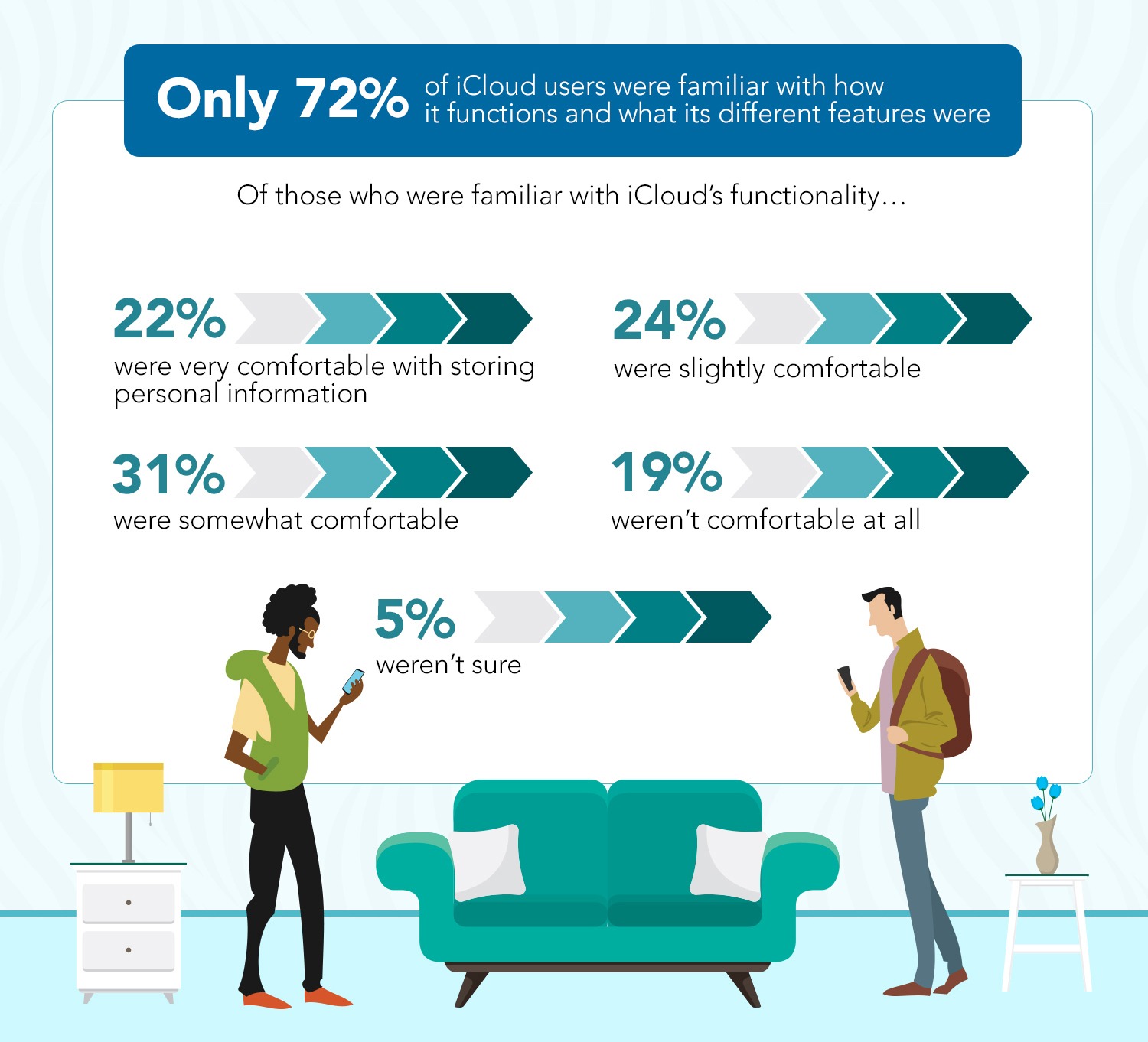 ​Deleting all photos and videos from iCloud completely

So, from the information above we know that the iCloud would potentially store our photos (and videos) automatically if we have the following feature turned on:

​To delete all traces of your photos and videos ‘completely’ from your iCloud account, we need to delete all them from My Photo Stream and Shared Stream, and disable all three services from our device.

Let’s start from the bottom and work our way up.

Go to your Photos App and tap on the Shared icon at the bottom. 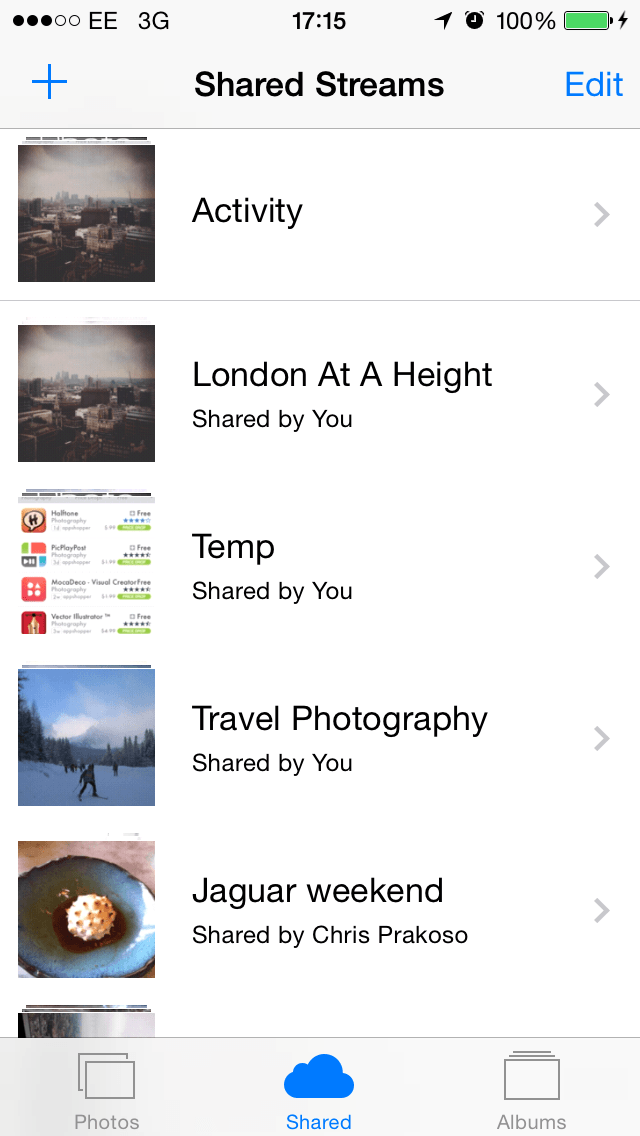 Delete everything listed here. You can do this by going in to each of the stream and delete from there, or by selecting Edit mode and tap on all the Red delete icon. 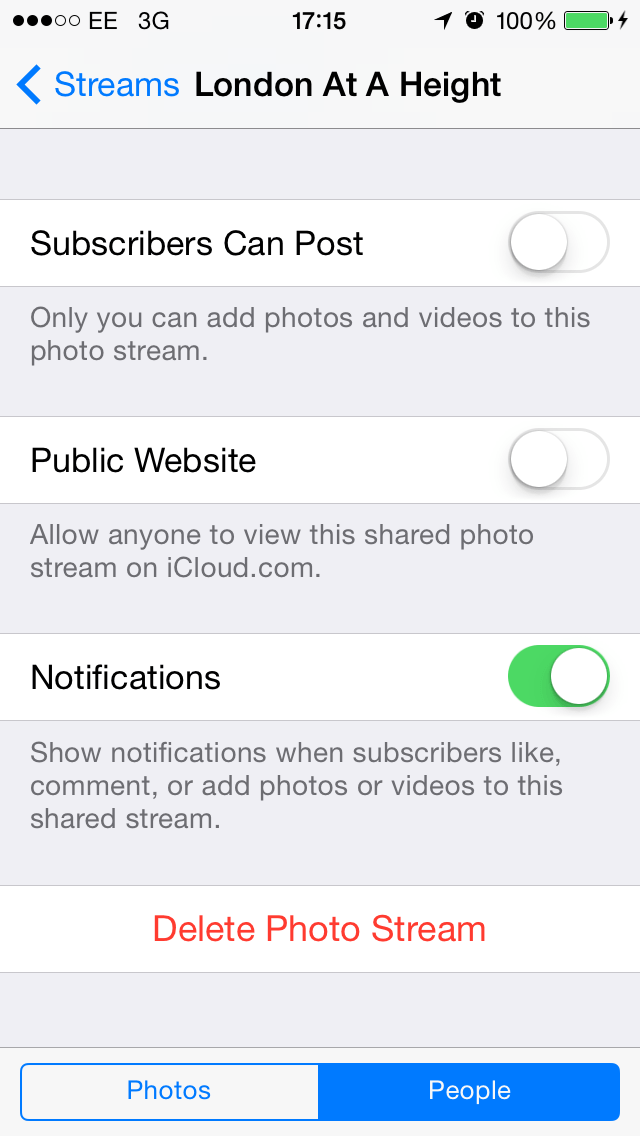 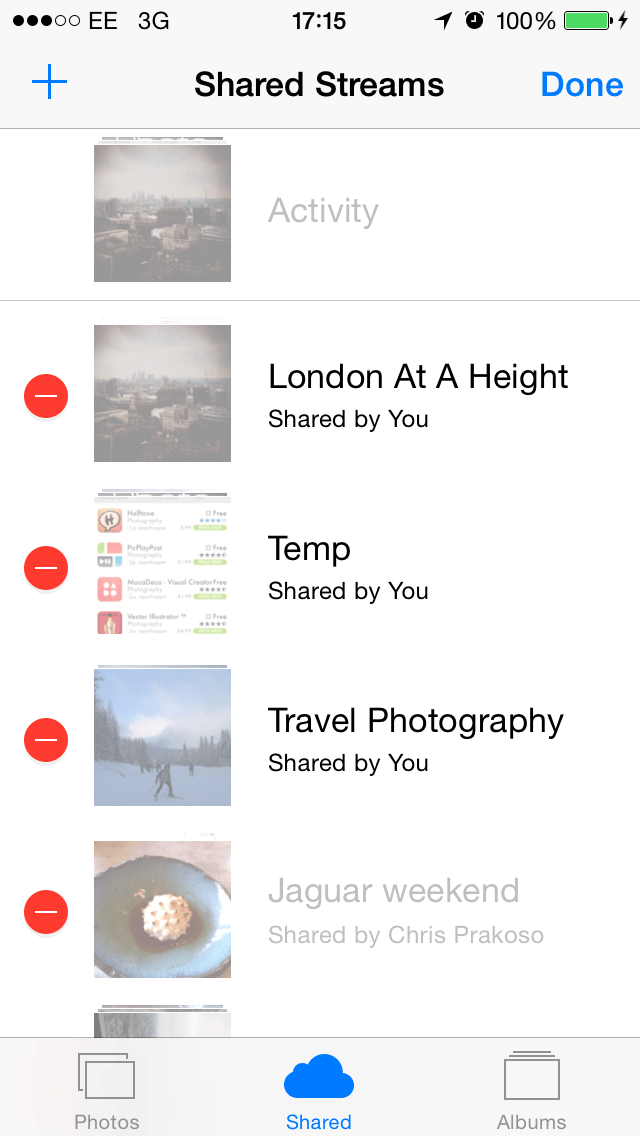 Or you can mass delete them all

​Delete photos from My Photo Stream

Go to your Photos App and tap on the Albums icon at the bottom. 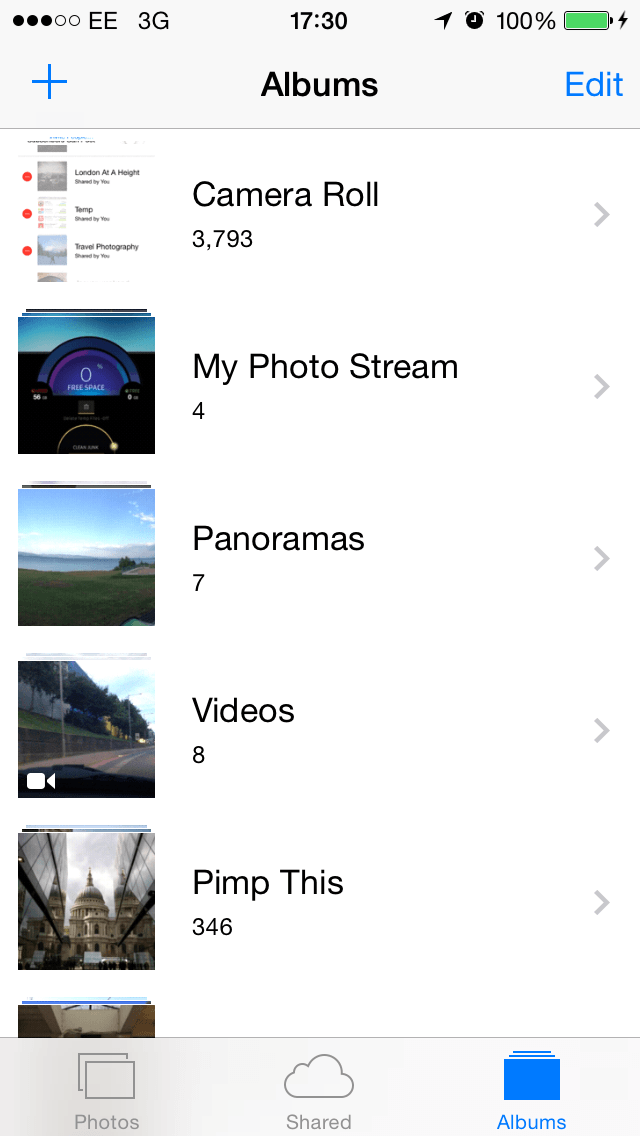 ​Look for My Photo Stream folder in your Photo Album

Find a folder called My Photo Stream. Go inside and delete ALL the photos there. 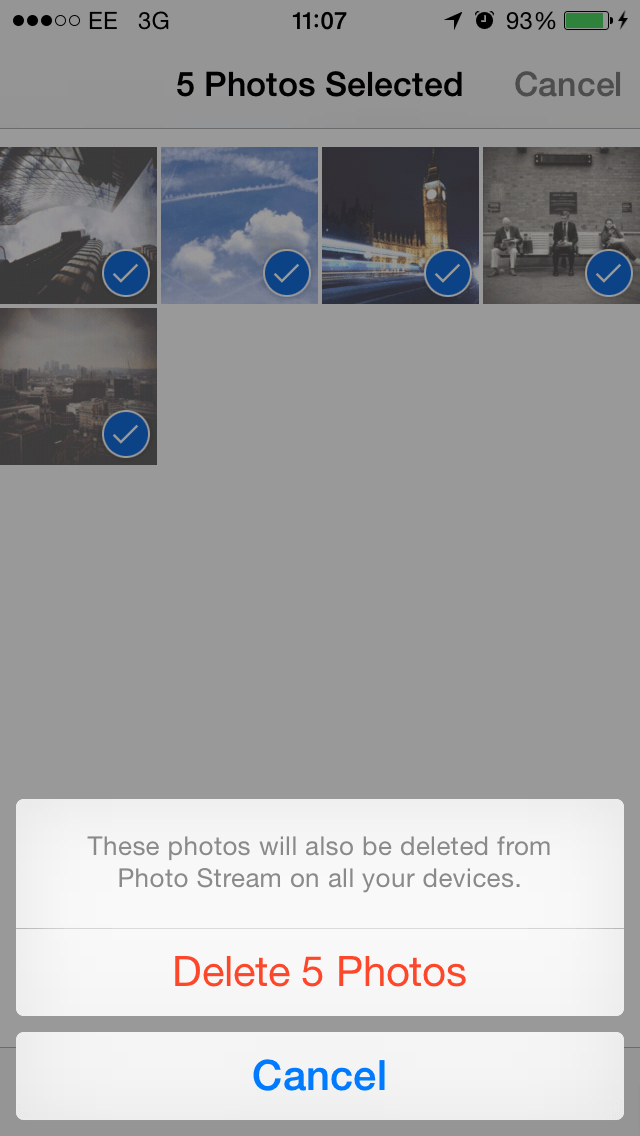 ​Note that if you cannot find either Shared Streams screen or My Photo Stream folder, that means you don’t have either feature turned on.

Now we need to turn off both services to makes sure no photos or videos are stored in the iCloud using these ways.

Go to your Settings app then navigate your way to the following: iCloud -> Photos. 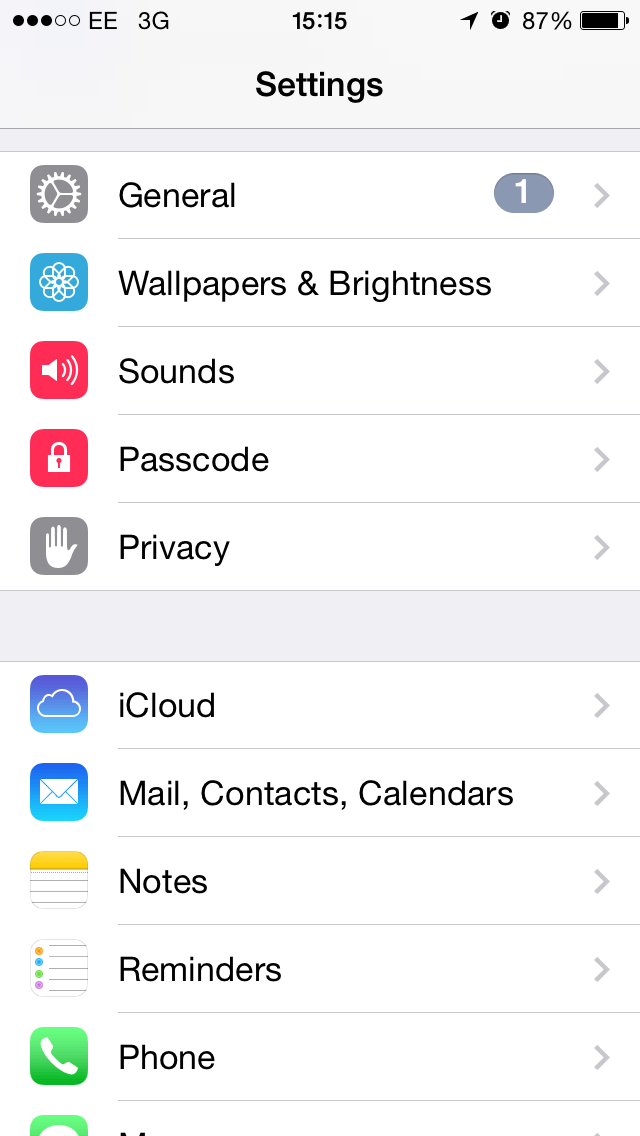 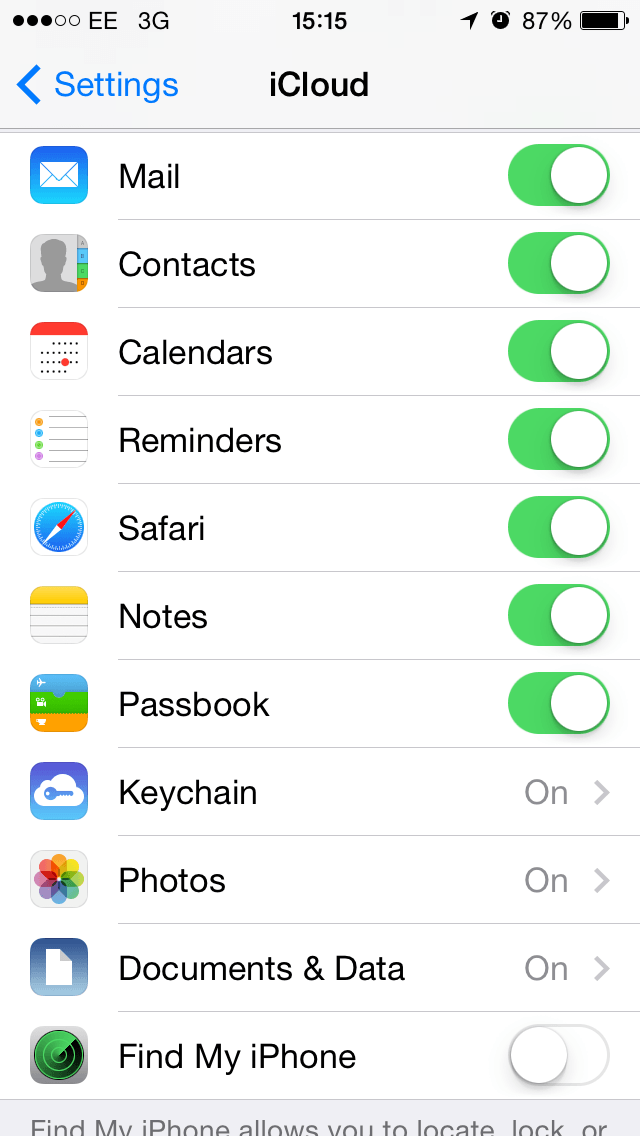 Here turn off both My Photo Stream and Photo Sharing. 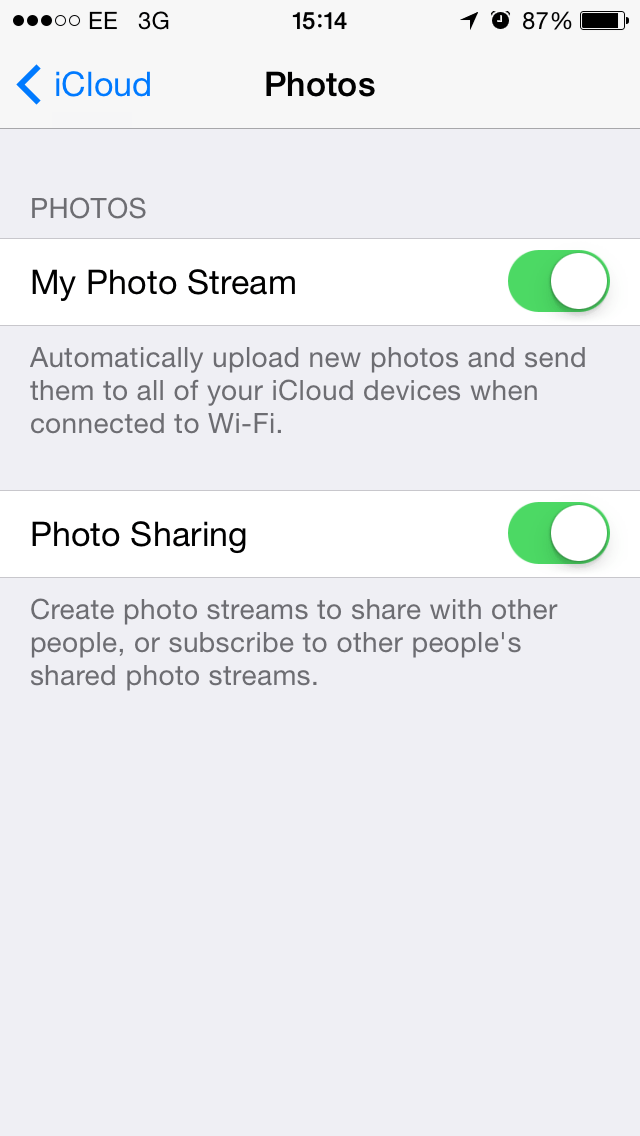 ​Turn off both My Photo Streams and Photo Sharing

Special Note for Photo Sharing, in my opinion this is quite useful feature especially if you share a lot to your friends and family. I would keep it on. But if you don’t need it, then by all means turn it off.

Another service we need to turn off is the iCloud Backup for Camera Roll. iCloud Backup itself is a very important part iDevice experience, especially for backing up your important data, so I would suggest to keep it on for most of the data type. Luckily we can pick and choose which data we want to backup. So in this case we just want to configure the backup for our Camera Roll.

Go to the Settings app again, and then navigate your way to the following: iCloud -> Storage & Backup -> Manage Storage -> This iPhone. 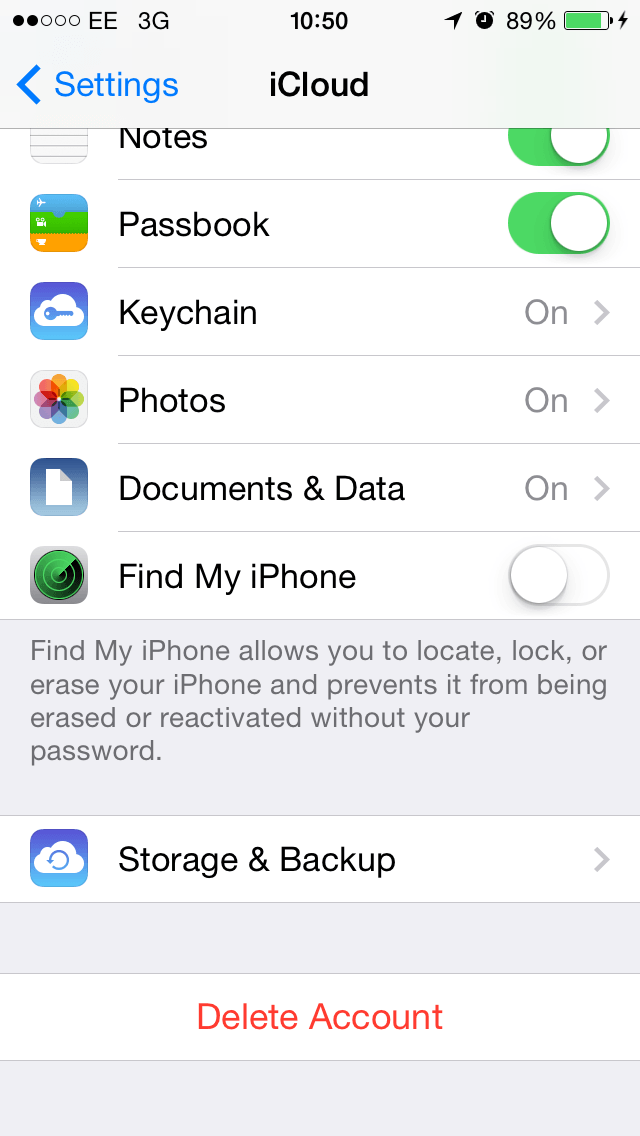 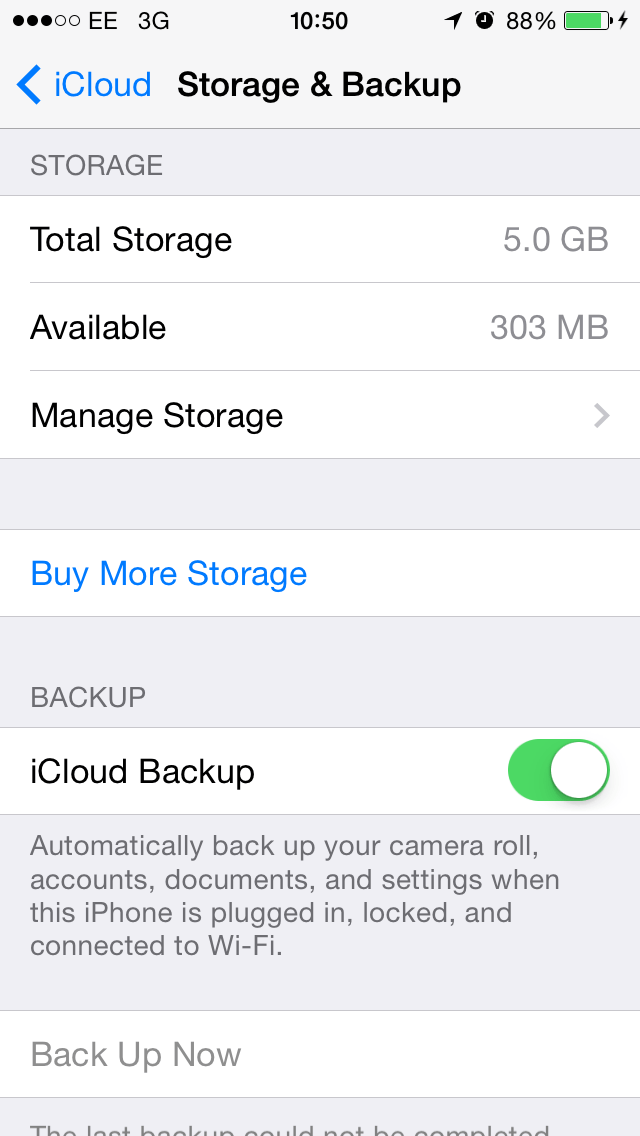 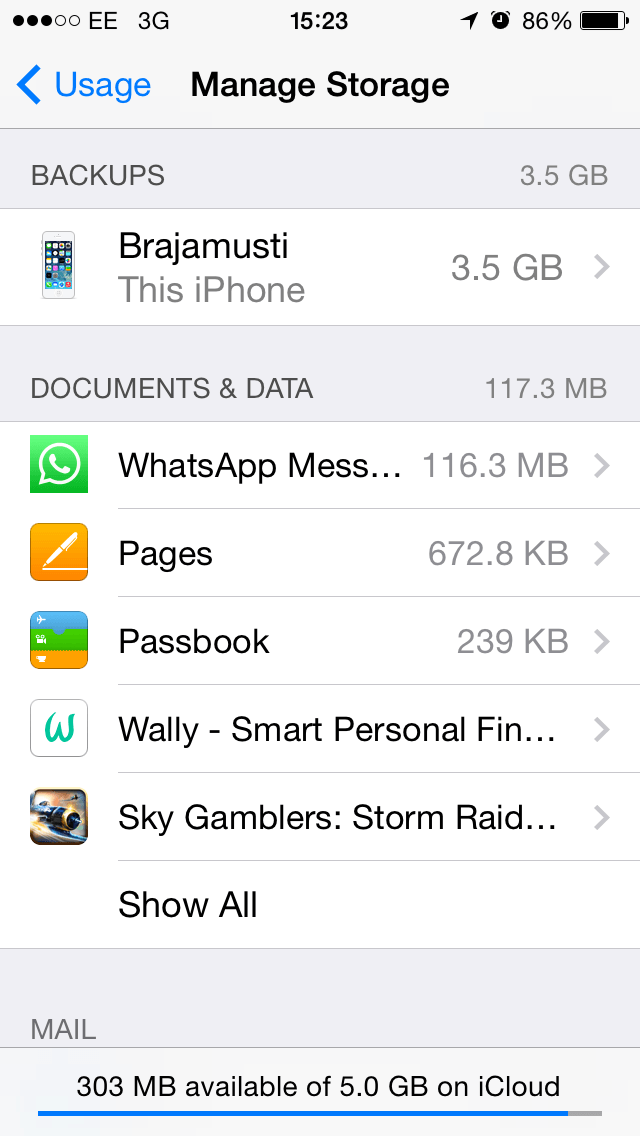 ​Then select This iPhone

In this screen under Backup Options section you will see a list of data type that you can include or exclude in the backup process. 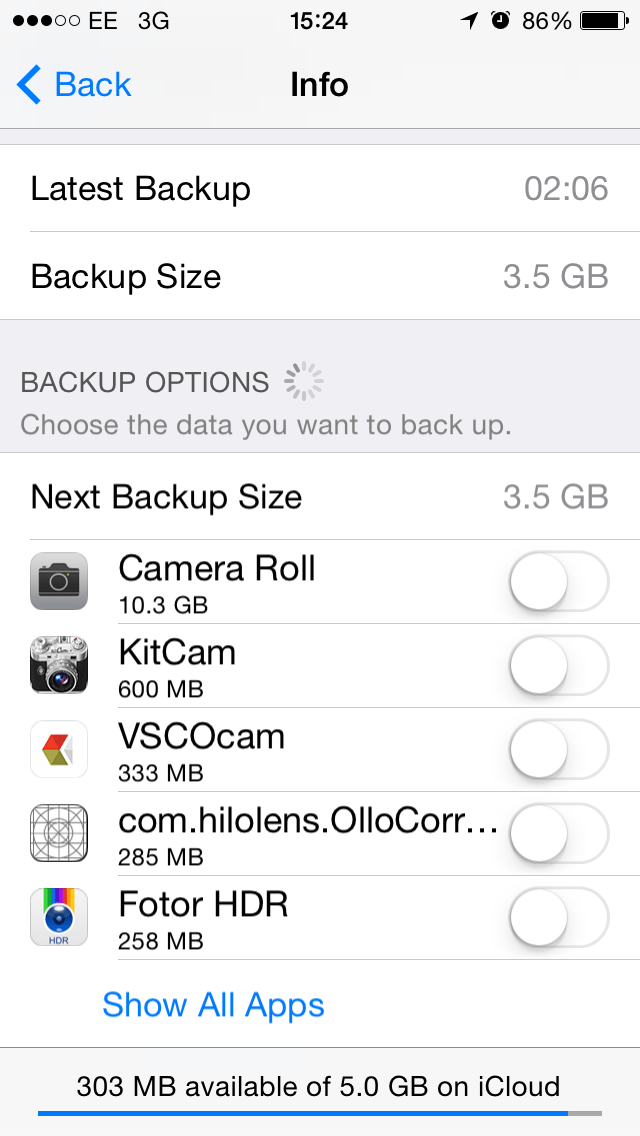 Make sure that Camera Roll is Excluded.

You can see from the screenshot that I’ve deliberately excluded my camera roll from the backup. However this is not because of any security problem, but it’s just because the size of my camera roll is just too big for 5Gb storage quota iCloud is giving us

Note that if you, like me, didn’t include Camera Roll in the backup, or even better, if you don’t use iCloud Backup at all. You don’t have to do this, or the next step.

Now the last thing we need to do is to replace the existing backup in the iCloud server which still contains the camera roll photos. To do this you can either leave the device to run the scheduled backup by itself, or you can force to do it manually by tapping on the Back Up now button. 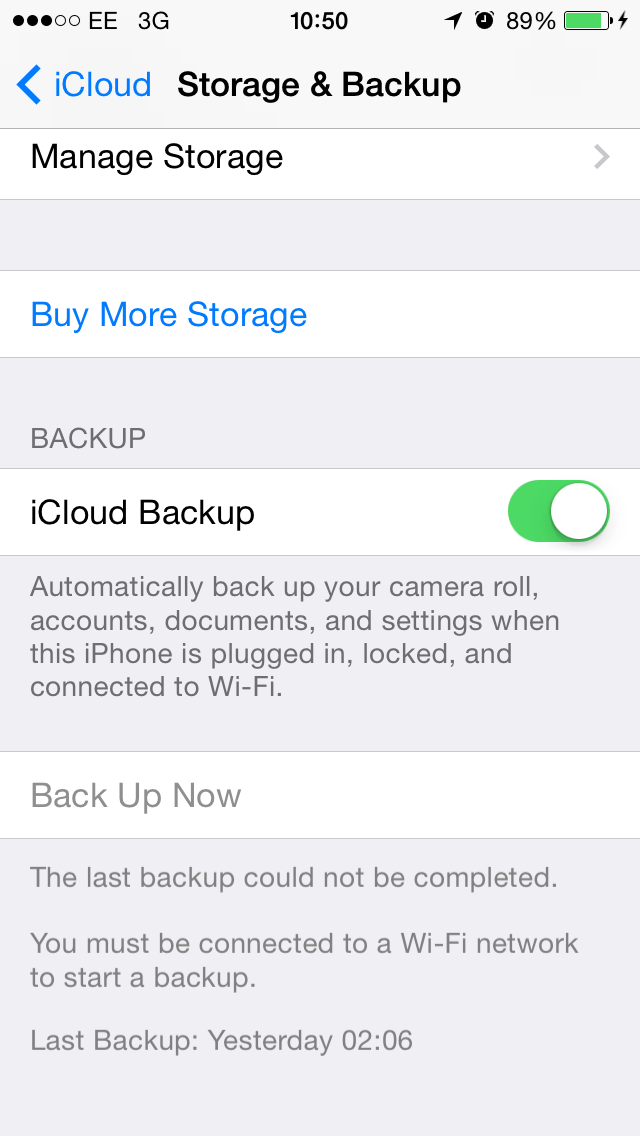 Now you can breath a sigh of relief safe to know that nobody will get any of your ‘you-know-what’ photos from your iCloud account.

But please bear in mind, there are still other sensitive data that is stored in the iCloud such as your contacts, you SMS texts or your emails.

So, even if you have managed to delete all your photos and disable the backup features you still need to check on your security, make sure that your password is strong enough and do the two-step verification as Apple suggests and explains in this post.