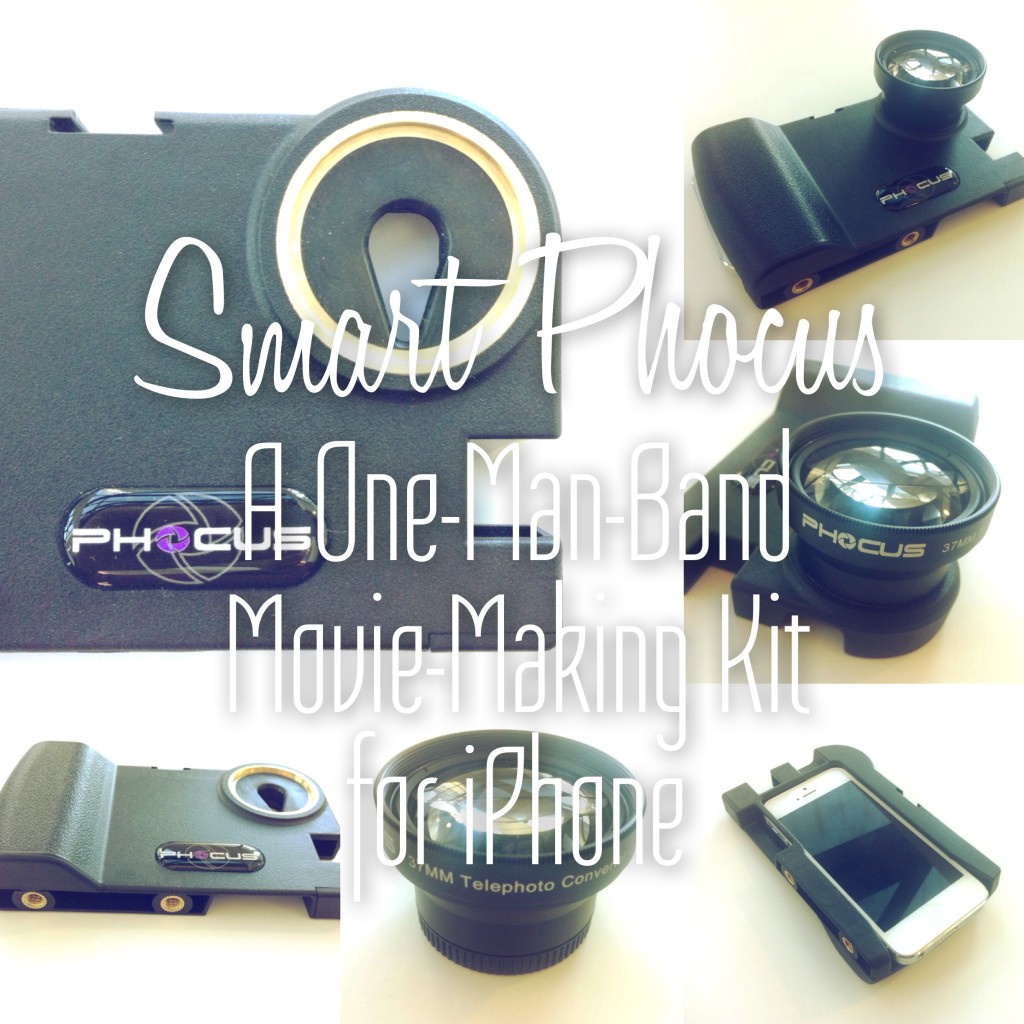 I’ve been reviewing a few iPhone lens kit in this blog, but this it the first time I came across an iPhone Case/Lens Kit combo that was design especially with Video in mind. The gear is called Smart Phocus and it’s basically a one-man-band movie-making rig for your iPhone.

Some of you might’ve remembered a piece of iPhone gear called OWLE. It’s quite an impressive piece of kit as you can see. But when I asked the maker of the kit whether they could send me a review sample, they said the product had been discontinued. However, they had created a new version of it and called it Smart Phocus.  Most iPhone accessories vendors have been focusing more on creating gears for taking photos than capturing videos. Smart Phocus is probably one of the first major vendors that tried to ‘conquer’ this niche.

The problems with capturing video using an iPhone

As you have probably known, the iPhone is not just good at taking photographs but also is excellent in recording video. The iPhone iSight camera is capable of capturing video in 1080p Full HD.  But taking videos with iPhone is not without problems.  Some of the biggest problems are:

1. Crop Factor: When taking videos with an iPhone your field of view is reduced up to 25 degrees compared to when you take photographs.  Basically you can fit less scene in video than you would normally could with photo.  It’s like the lens is in a permanent zoom mode.

2. Stability: Unlike taking photos which only take mili-seconds each time, capturing a video normally would take more time, minutes or could be hours.  So unless you are planning to shoot the next CSI or 24 series I wish you good luck with holding your iPhone just like that for more than 5 minutes.

These 3 factors are major issues that people are facing when they want to capture a video that is more than just a 15-second ‘look what my cat does’ Instagram shot.  Smart Phocus seems to be designed from the ground-up to deal with these problems.

A Case designed for Pros

Let’s first take a look at the case. The first thing I noticed when I saw Phocus case was that it was much bigger than average iPhone cases. The hard-plastic made case features thick frame around the edges with an exception of one side which has an opening to slide the iPhone in. The overall case dimension would probably equal to that of other bigger Smartphones, the Samsungs and HTCs. So it’s not too bad and I can still put the whole thing inside my pocket comfortably.

On the other side of the case, where you would normally hold the phone you can find a ‘bump‘ which works as a hand-grip, like the one you would find in DSLR cameras. This hand-grip combined with the added ‘girth‘ makes it easier and more comfortable to hold the iPhone for taking videos or photos, especially in a prolonged time. 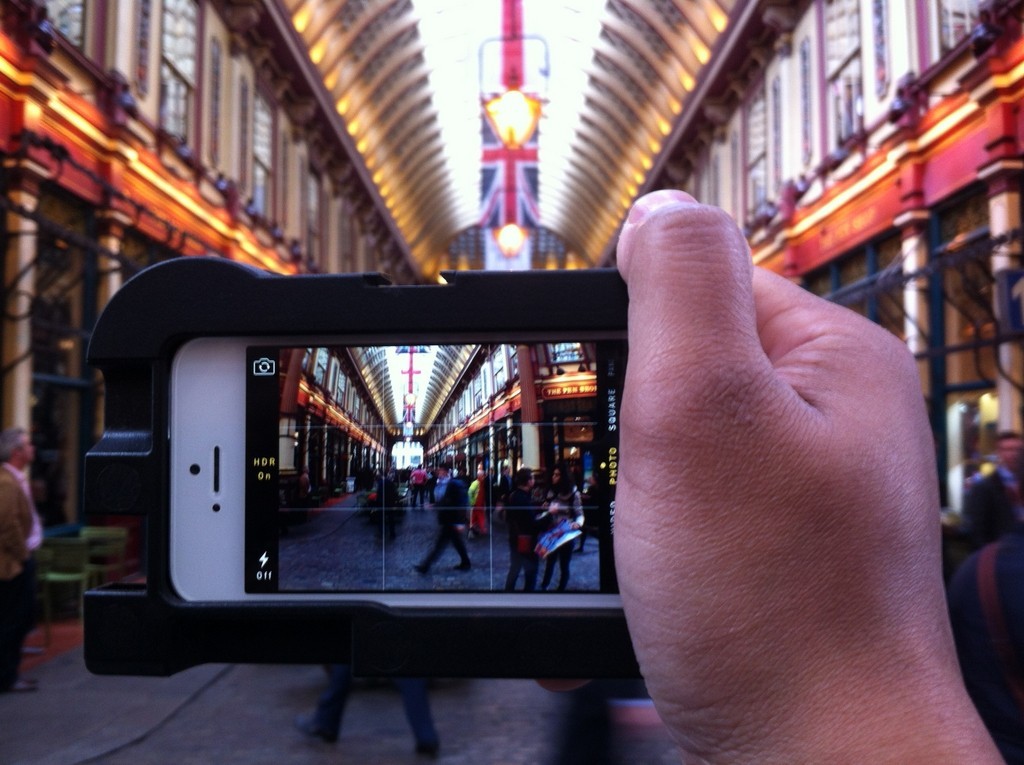 The Phocus case has all the openings at the right places; one for volume etc, another one for on-off button. In addition to this it also no less than 3, yup that’s three, 1/4″ standard threads, on to which you can mount any other compatible camera gears such as tripods or stabilisers etc. Finally, at the top of the case, you will find a hot-shoe on which you can mount other ranges of accessories like LED light or Microphone (which is also sold separately by Smart Phocus as a bundle).

You can see that just by using the case you get everything you need for a Pro iPhone Case.   The hand-grip will make the iPhone more comfortable to hold and the mounting points can be used to attach other Pro video camera gears in the market that can help in the stabilisation area, sound capture and illumination.

One thing that I thought could make it better is if they could add some soft lining inside the case. This would give an added protection from bumps and scratches.

Lenses made for Pros

If you think that Smart Phocus case is cool, wait until you see the matching Lenses! Let’s just say that the case is not the only one that is massive, it has the Lens that go with it.

Eagle-eyed readers would notice one feature from the case that I haven’t mentioned above. Yes, it’s the lens mounting thread that sit on top of the iPhone standard lens. And if you really noticed you would’ve realised that it’s really huge! At least in comparison to the average size of most iPhone Lens conversion kits in the market. 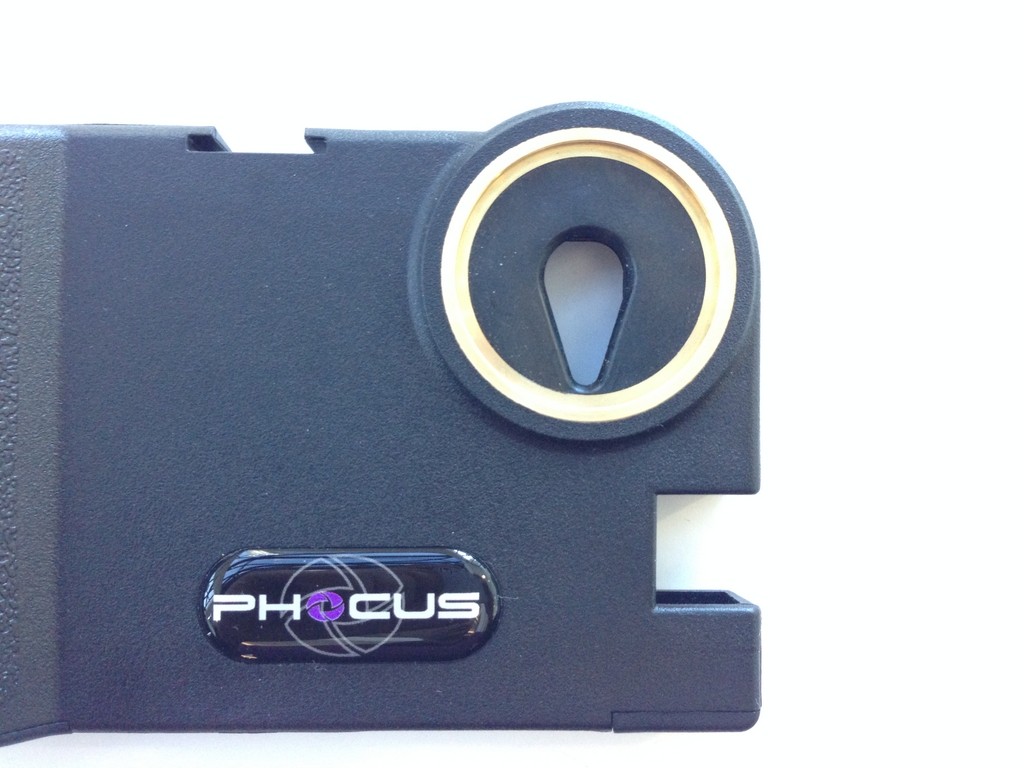 As a matter of fact, the thread diameter measures at 37mm! That’s only on the case end, on the opposite side each lens diameter increases to 42mm!

Why would you think the reason behind this unique lens design, you might ask? Well I was initially baffled myself, so I asked this same question directly to Phillip Felice, the guy who’s heading Smart Phocus. He explained that the large lens Aperture is useful to first capture bigger image, and second it’s to prepare for Smart Phocus next product which was supposed to be an SLR Lens Adapter.

Let’s tackle the first answer first. What does it mean by ‘capturing a bigger image‘?  Remember I mentioned that one of the issue with capturing video with the iPhone is the Crop Factor?

You can ‘fix’ this issue by using a Wide-Angle or a Fisheye conversion lens which practically will give you back that Field View you lost thanks to the cropping (and even gain more if you use Fisheye). The only problem with these lenses is that you will get the vignette artefact in the form of black ring around the outer edge of the image taken.

In addition to the vignette effect, there is also the problem of lens distortion which makes some part of the image, especially around the edges to be blurry (unfocused). These two issues obviously reduce how much clear image that is actually captured, and some lenses exhibit them worst than others.

This is where the wide aperture of Smart Phocus lens will help with eliminating these artefacts.

As you can see in the following Demo Video , Smart Phocus Wide Angle exhibited NO vignette at all and a minimal distortion around the edges. Which means that with this lens I could get more image compared to if I were using other lenses.

I am attaching here also sample images I took as comparison. They were taken using first the standard iPhone lens, then the Smart Phocus Wide Angle lens. I also included some sample shots I’ve taken with other lenses, the first one is the TurtleJacket PentaEye Wide Angle, and the last one is using my reference lens, the Olloclip Wide Angle. I let the images speak for themselves and you to judge their quality.

Taken with the iPhone Standard Lens

Each lens would screw to the that mounting point on the case I mentioned above. Although I must admit that the screwing part need some getting used and a lot of practice. It’s just not the easiest thing to do (Phillip explained on the best way to do this in the video I attach at the end of this post).

I also mentioned about the fact that the wider part of the lens has a diameter of 49mm. Long time photographers would recognise this number because it’s one of the standard diameter for filters (real ones). That means, you can practically get any filter you like on the market and use it with Phocus lenses!

What about the Macro and the Telephoto. Interestingly to get to the Macro lens you will need to unscrew the Wide Angle lens first. Like all Macro lenss, Smart Phocus 10x magnification Macro lens will allow you to get very close to your object without loosing focus. And if you check the following sample pictures I took, the quality is very good. The lens produced sharp images and no distortion.

As for the 2x Telephoto Lens, interestingly enough, if you see the sample below, I got a slight vignetting artefacts on the right hand side of the image, and a bit of distortion. 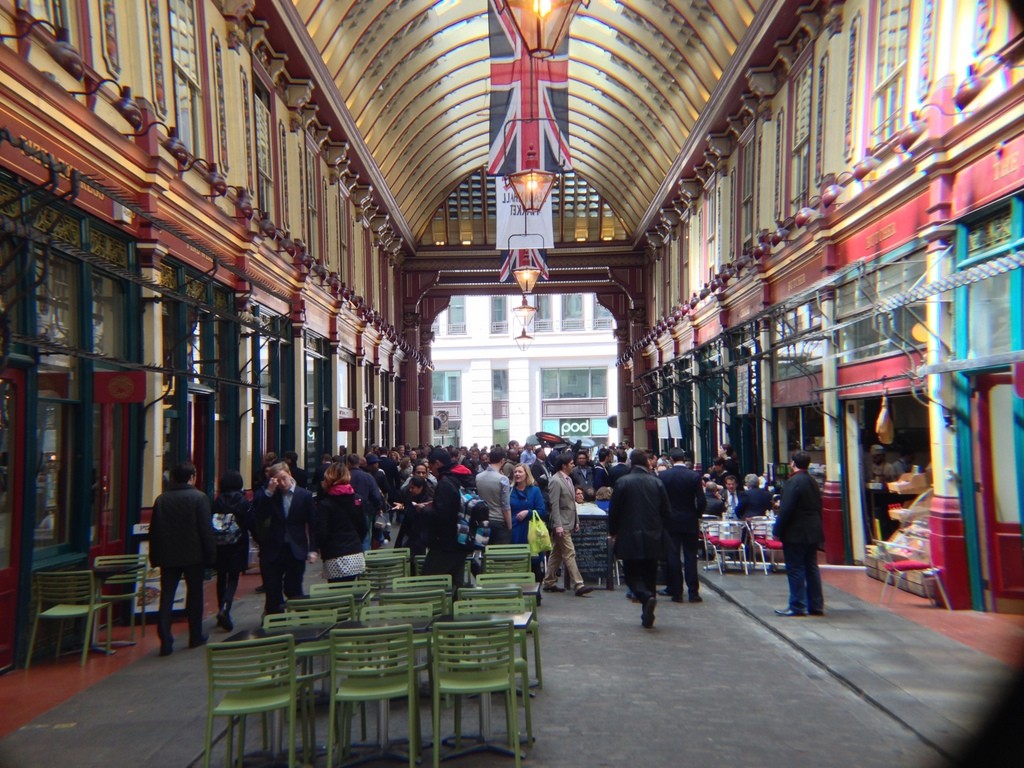 Lastly, as a testament of its Pro pedigree, these lenses were made of high quality cnc machined aluminium and high quality glass.  They look and feel like their bigger DSLR cousins, except that it costs only a fraction.

What else in the package?

Smart Phocus sells the case and lenses in several kit packages. What they had sent to me is the one that’s called Phocus 3 Lens *Plus* Bundle. The kit includes the following: 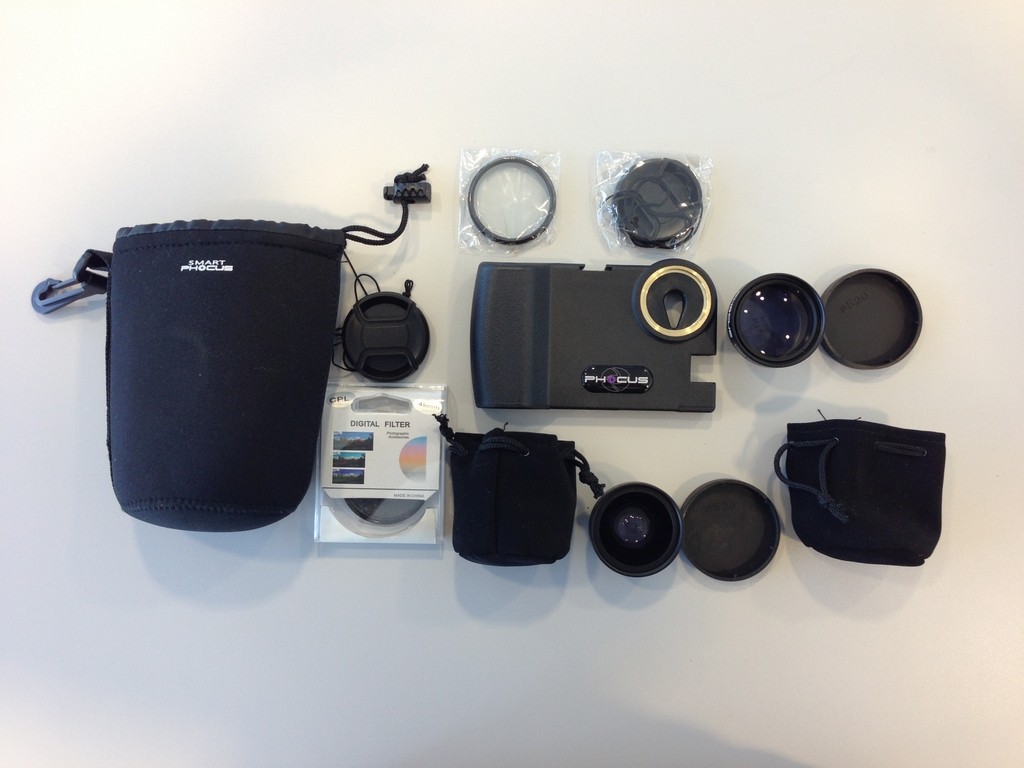 For more kit offerings which ranges from the simplest one with only 2 lenses ($79.95) up to the Ultimate kit bundle that includes everything plus a Microphone ($299.95), please check Smart Phocus store.

There is no doubt that Smart Phocus was designed with Pro in mind. The gear’s build quality is, in my opinion, very high. And judging from the range of bundle kits and the price point that comes with each, it’s clear to me that this piece of engineering is for serious work.

If you are doing a lot of video shootings, Smart Phocus is perfect for you. The case is very versatile as you can attach any video accessories you can throw at it.  The lenses are of Professional Grade, plus you have the option to attach Analog Filters that take your creativity fancy.  The sky is the limit 🙂

But if you do more photos than video, I suggest you look somewhere else. I think with the price point being offered you can get something better that is more suitable for photography.

By the way, if you were wondering what happened to the SLR Lens Adapter Phillip had mentioned, I was wondering about that too. It turned out that they might ended up NOT doing it, which is ashamed as I have a bunch of SLR lenses I would love to use with my iPhone.

But Phillip had hinted to me that they have been working on some other new gear, though he didn’t elaborate more about it. Rest assure I will let you know as and when I find out about it, just ‘watch this space‘!

In the meantime, check out this video that features Philip himself explaining and demonstrating Smart Phocus in more details.