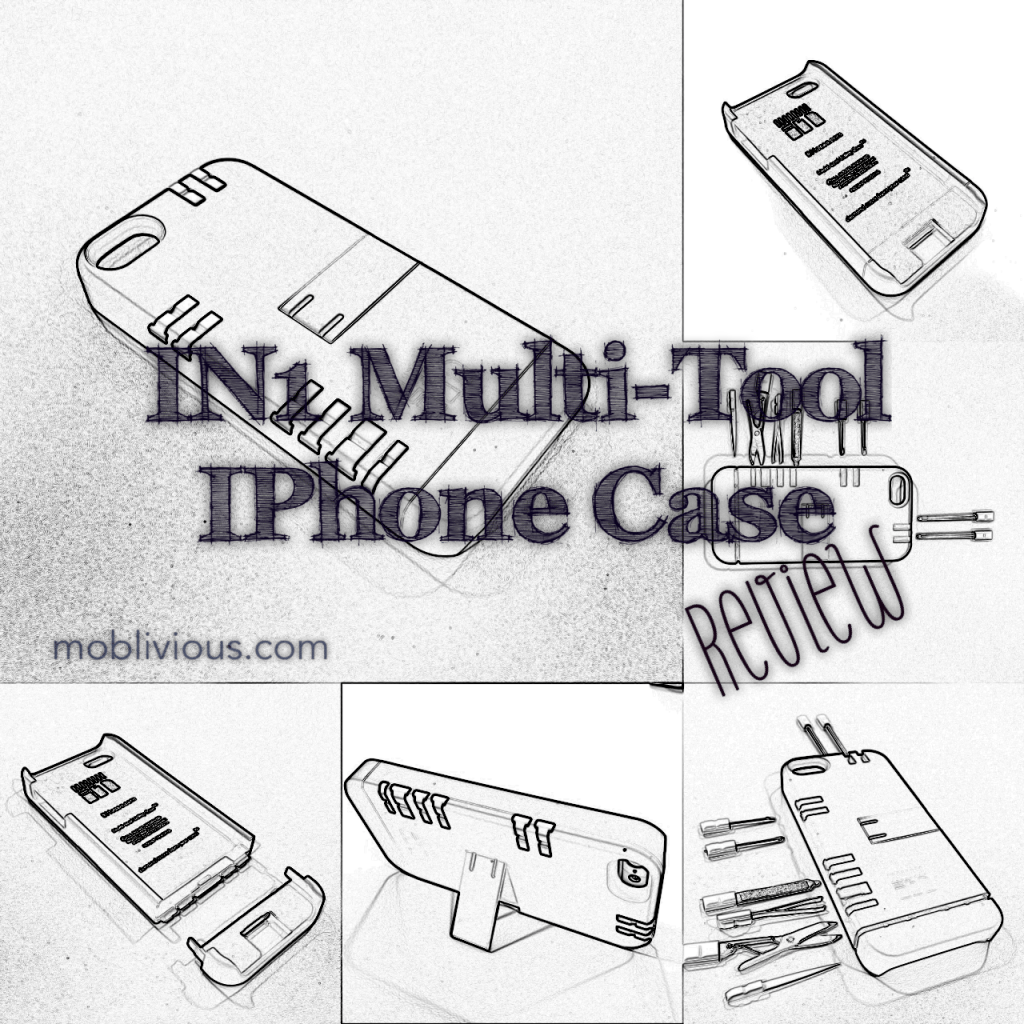 Here is an idea so obvious I was wondering why nobody thought about it before. The phone is something we carry with us all day every day. So why not have a phone case in which we can also carry tools we might need from time to time or in an emergency situation? This is exactly what IN1 had done! They had manufactured literary a multi-tool carrying case for your iPhone! Read on for more details.

Is that a bulge or you are just happy to see me?

In a first glance the IN1 Multi-Tool Utility Case, as it is formally known, looks just like another iPhone case, apart from the fact that it has more ‘girth‘ than the others. The case, made of hard polycarbonate, is as thick as 2 iPhones stacked together. Though this is obviously understandable because those tools must be taking spaces somewhere. 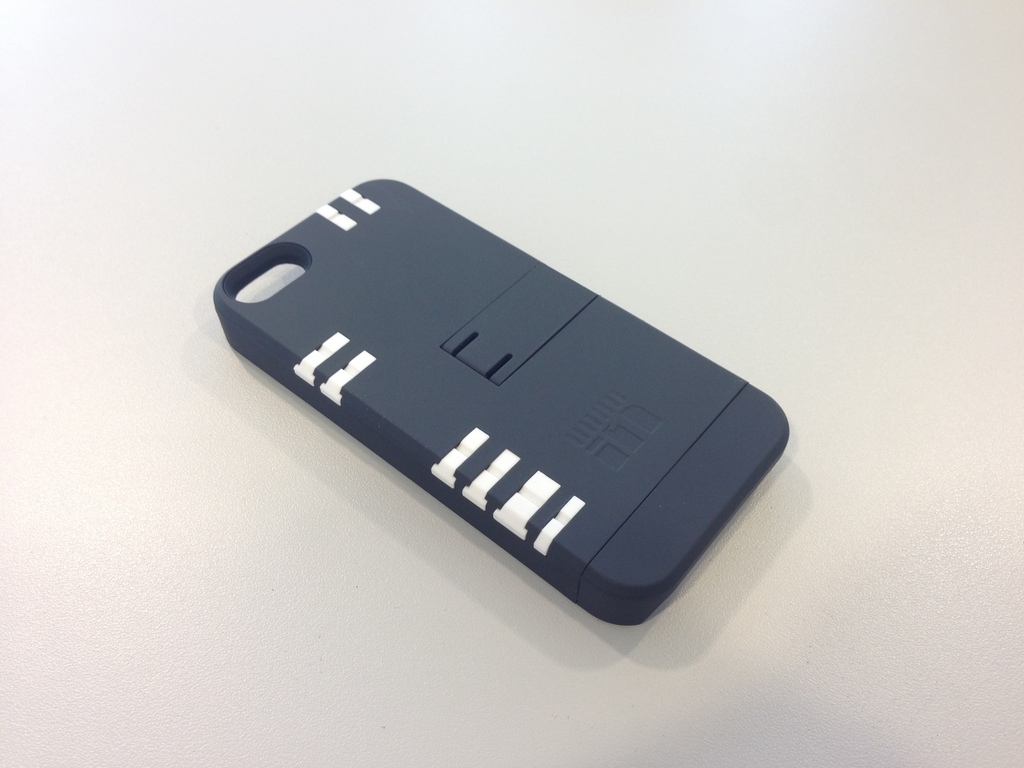 Having said that, I actually welcome the additional thickness, as it has somehow improved my grip on my iPhone 5, making it easier to hold and handle, especially when I need to take photos. The case is made from hard plastic. The outer skin is rubberised, one of the reason for the improved handling as it won’t slip off your hand easily. The inside is lined with scratch-resistant soft and velvety material. 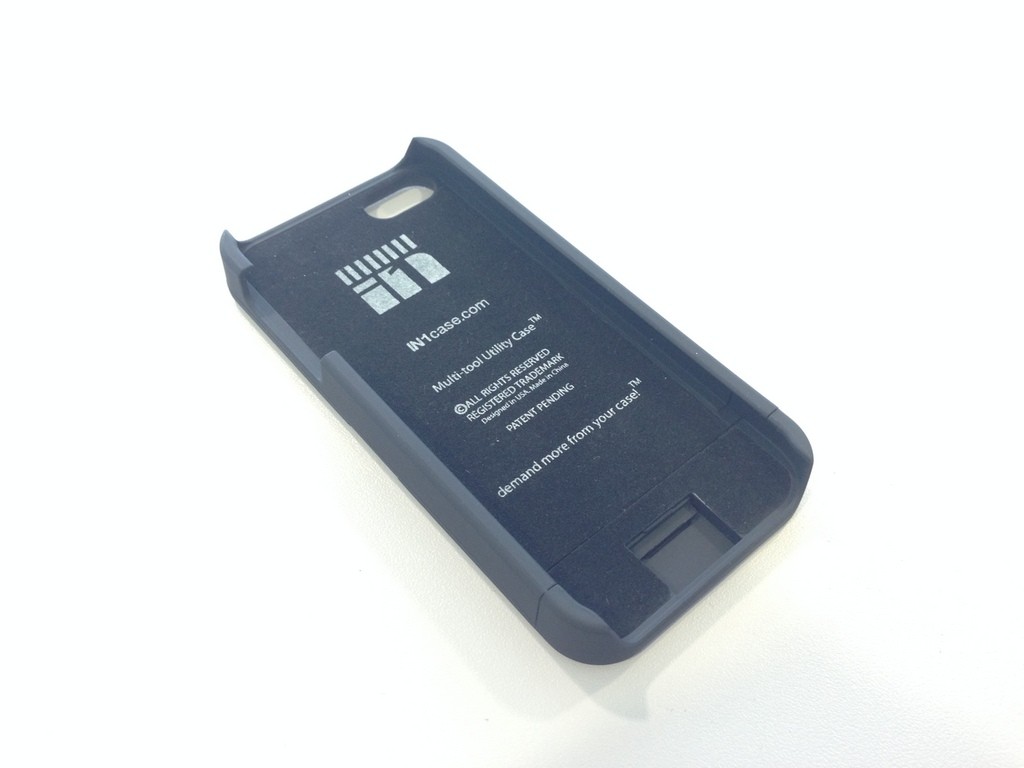 Unlike other type of cases, it consists of two parts. To use it you pull out the bottom part, slide in your iPhone, and put back that bottom part until it clicks. I like this no-brainer installation very much in comparison to other type of clip-on cases where you seem to be needing a wrench to take the phone out. 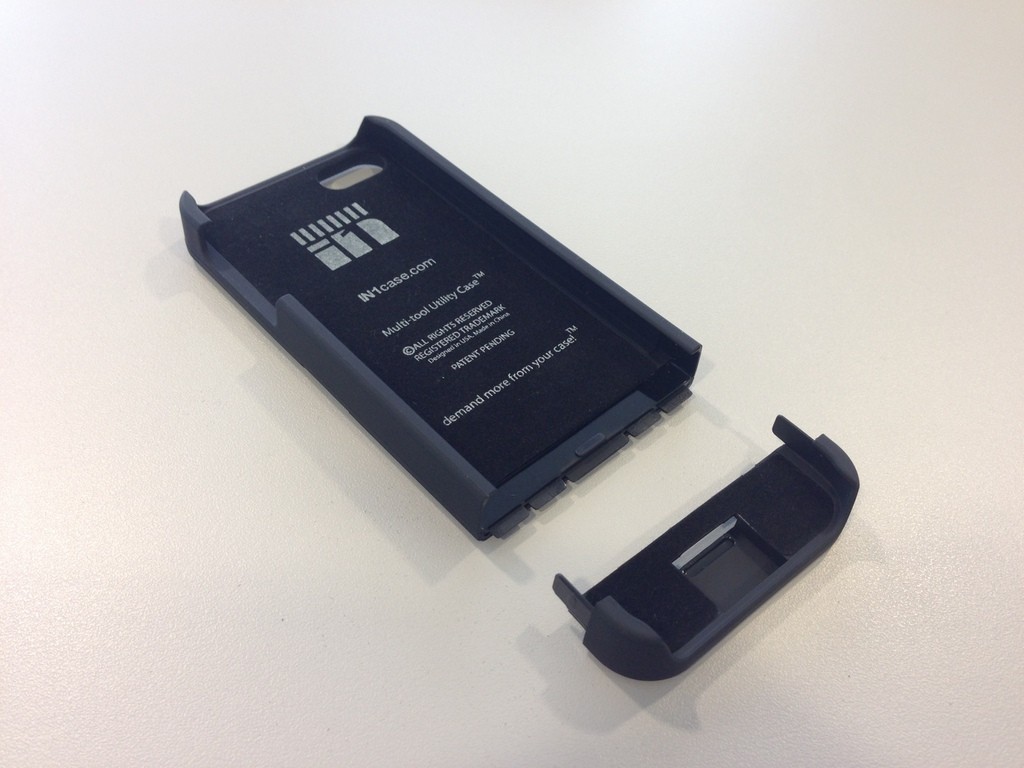 The result is really a nice fit, there is no room for the iPhone to move about. I feel that my iPhone is really being protected. The case has openings on all the correct places. There is one at the top, at the bottom and on the side, providing easy access to all the ‘orifices’ and functions. 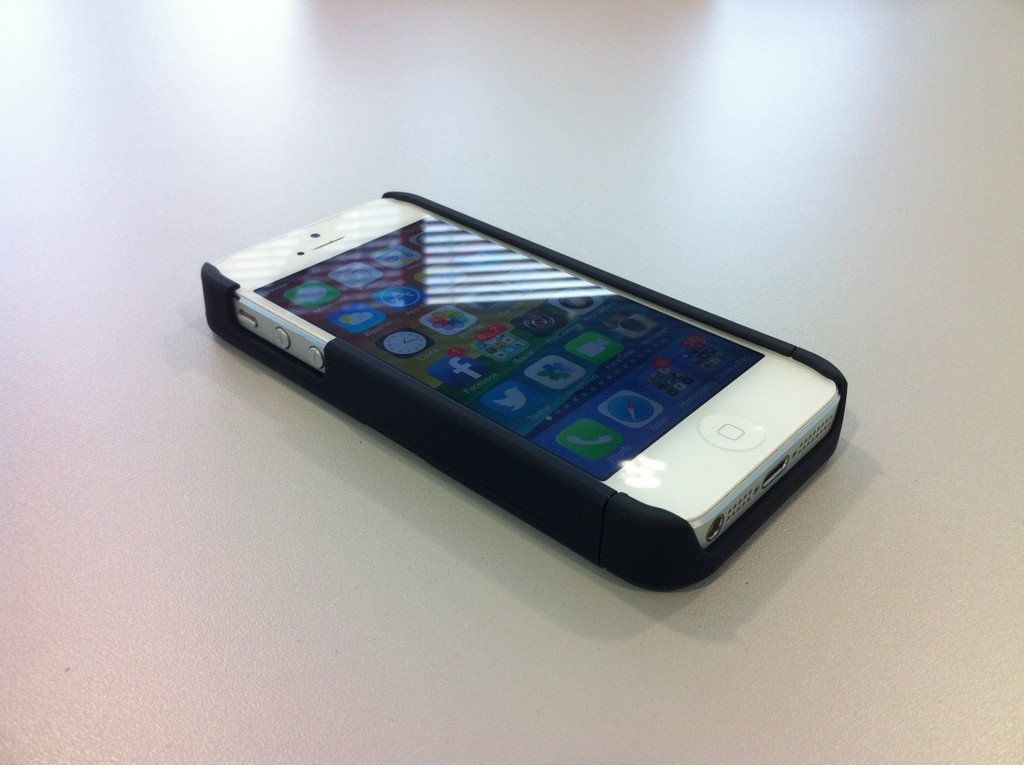 More tools than a ninja can throw

That’s what I’m feeling like, a tool ninja! Situated around the side and the top of the back side of the case are the tiny tools. You have 8 of them in total, 6 on the side and 2 on the top. They consist of the followings: 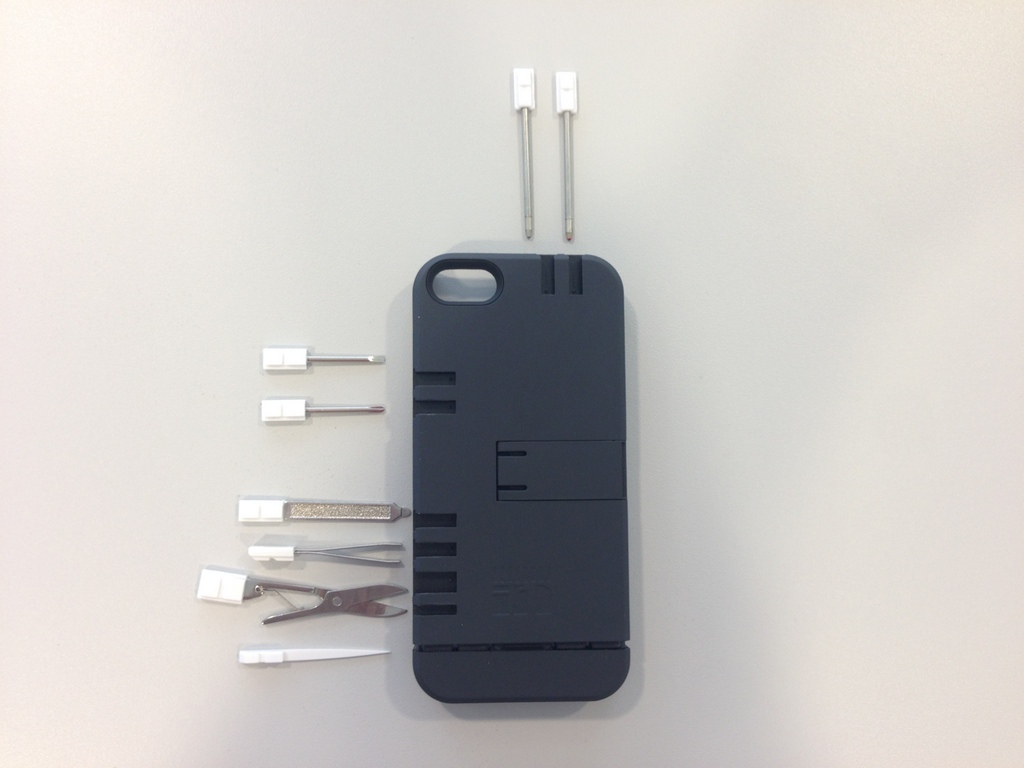 Each of these small tools is tucked neatly in its slot, ready for you to un-sheath in any moment notice. They are made from some kind of metal, though they don’t feel particularly strong to me. All of them have a small plastic head with which you can handle the tool. Alternatively you can pull the tool out, turn it around and stuck the head back into the slot, effectively making your iPhone as a massive handle 🙂 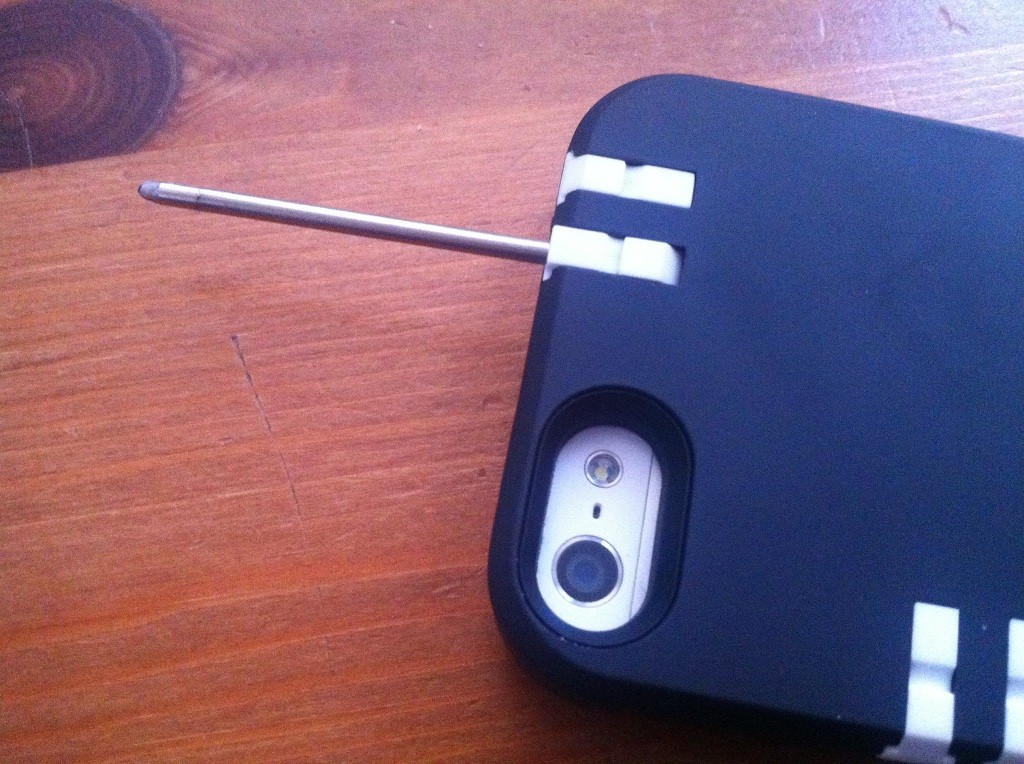 As for the selection of which tools are included in this iPhone Case, let’s just say that they won’t make you a MacGyver just as yet 🙂 But you have enough to help when the need arises.

I’ve tested each of the tools and they seem to work ok, to some degree. The pens work fine, they write ok. I would prefer a black ball point pen rather then the blue one, but that’s just my preference. The screwdrivers are good enough for small screw and I recommend that you use the phone as a handle as I’ve explained above to get more leverage. The nail file, the tweezers and the toothpick, well they work as advertised. The scissors is unfortunately a different matter. It just doesn’t work! Not very well anyway. You are really pressed hard to make it to cut anything. I had to ‘angle’ it in a certain way to make it work. And by that time I’ve already gotten so frustrated I lost the will to cut the damn thing. This is some kind of ironic really, considering that the scissors is probably the tool that we would use more than the others. 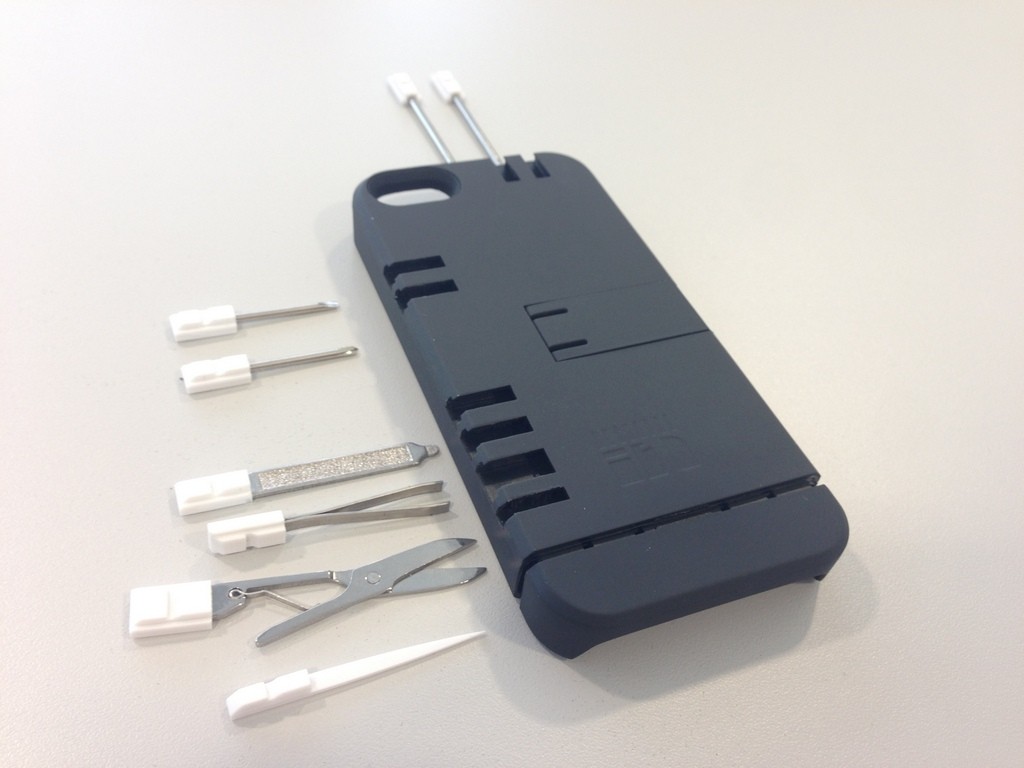 I would love also if the case would include a blade. But it seems to me that they are afraid that it might be too dangerous for people to carry blade on their phone and they don’t want to get the blame. Fair enough. But I still think it would be great addition.

The tools are actually not the only thing that the In1 iPhone Case has in store. It is also featured an integrated ‘kick-stand’. This one I like very much, it saves me looking around for things to prop my iPhone to when I want to watch something. Just flip the ‘flipper’ out and there you have it. Quick and easy.

Some of you might’ve thought about this the moment you saw what’s included in the case, because many of us have had similar experience with the authority, the TSAs of the world, whenever we go somewhere by plane. There is always things, a nail clipper, bunch of screwdrivers, swiss-army knives, etc.; that we forgot to stow in our checked luggage. More often than not, these stuff will go directly to one of those ‘glass collection bin’ which to me looks like a harsh way to remind everybody of their stupidity.
Well, you don’t need to worry that they will confiscate your In1 Multi-Tool Utility Case, because it is TSA Compliant!

This is probably also the reason why we don’t have a blade as one of the tools. Nevertheless, every port in the world seems to have their own ‘interpretation’ on what is allowed or not allowed, so please bear this mind if you want to take your case with you on the plane. I am almost 100% sure that the X-Ray will pick it up and they will ask you to take it apart, just in case. You don’t want it to end up in the ‘stupidity hall of fame glass’, do you?

In1 Multi-Tool Utility Case is not the only iPhone case that carries a ‘swiss-army like tools‘ in its belly (there are at least another two that I know of), but it does seem to have more variety compare to others. I really love the case itself, it feels sturdy in my hand, and thanks to its rubberised surface, it won’t easily slip off your hand. The soft inside line also gives some shock-protection to the iPhone. I also like the kick-stand, very practical when I need to prop my iPhone.

The tools themselves are an adequate selection of tools that one might need to use occasionally; writing some notes, opening small screws, opening packages; though obviously they are not for heavier tasks as it is shown by the not-so-strong scissors.

You can buy IN1 Multi-Tool Utility iPhone Case from IN1Case.com. They only sell one for iPhone 5 or 5S I’m afraid, so if you got 4 or 4s you are out of luck.

You can choose from 3 different colours, Black, White and Clear. Along with the Case’s base colour, you can also pick the colour of the tools (the plastic head that is). They are available in White, Black, Blue, Green, Orange and Pink. The Clear Case looks quite cool with the colourful tool heads. You can check how they look like at IN1Case Online Store.